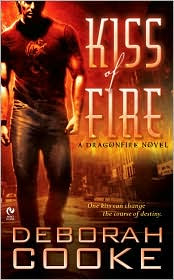 I actually read Kiss of Fire by Deborah Cooke back in March, and even wrote this review shortly afterward. I think I was sitting on it all this time because I was having a difficult time deciding on a grade. But I read two posts at other blogs today that made me realize I had t oget myself in gear. First, I read an interesting post by Holly on The Book Binge about what she looks for in a review, so I decided it was time I finalize a detailed explanation of my grading system for book reviews. Then, I read a post by Jill D. on The Romance Rookie. Jill's young daughter gave her Kiss of Fire for Mother's Day and Jill was asking if anyone has read it yet. Hello?! If those two blog posts aren't signs that I ought to decide on a grade for this book and finally post my review, I don't know what is!
Kiss of Fire is the first novel in the Dragonfire Series by Deborah Cooke. In this new paranormal romance series, shape-shifting dragons live alongside humans, keeping their dragon shifting secret. These dragon shifters, known as the Pyr, command the four elements--air, earth, water and fire. The Pyr warriors are the dragon shifters who live peacefully among humans and in fact, do what they can to protect the humans. The Slayers, on the other hand, are a faction of dragon shifters who wish to kill off all the humans so that they may claim earth for theirs alone. They will stop at nothing to achieve their goal, including killing the Pyr warriors who protect the humans. In this first Dragonfire novel, the final showdown between the Slayers and the Pyr warriors begins.

The Pyr mythology is laid out in this first Dragonfire novel alongside the love story of dragon shifter Quinn Tyrrell and human Sara Keegan. Quinn has been betrayed more than once by his own kind in his youth and therefore refuses to associate himself with other dragon shifters. Many, many years later, he is still denying his place among his fellow Pyr. What he cannot deny, however, is the firestorm, or irresistible mating bond, that he feels for Sara.

Sara is devastated by the recent deaths of both her parents and her beloved and quirky aunt and has decided to run her aunt's New Age bookstore. When she becomes the victim of a vicious attack by the Slayers, Sara is rescued by Quinn in his dragon form, as he has already sensed the firestorm with Sara and will do whatever it takes to protect her. As Sara and Quinn work through their firestorm, they are also discovering the crucial roles they both play in the survival of the Pyr and are forced to make decisions of grave importance to the species.

Kiss of Fire is a commendable start for a new paranormal series. The Pyr mythology and the rules of this paranormal world are woven neatly into the story and are explained clearly. The descriptions of the Pyr in their dragon from are richly detailed and the fighting scenes are vivid and exciting. Also, Ms. Cooke offers her own unique twist on the concept of 'destined mates' in her series that still gives the hero and heroine control over their happily ever after since the couple is only destined to be mates to bear Pyr offspring. Falling in love along the way is not guaranteed and isn't even expected among the Pyr. They have to work at that without the help of destiny, if it is to happen at all.

I really liked both the hero and heroine. Quinn is the strong silent type of alpha male. He is assertive and protective, but not overly bossy. and he respects Sara's need for time and space to digest the Pyr world and her role in it. I really liked that he didn't pressure or rush her. Sara is an average woman, intelligent and attractive enough, and thinks of herself as a simple person. Throughout the story, she learns that she is indeed special and although she is skeptical, she is reasonable enough think through different possibilities no matter how absurd and bravely embraces her destiny. Her journey to realize and accept her place in the Pyr world was well paced.

My only complaint with Kiss of Fire is that the heat between Quinn and Sara fizzled out during the second half of the book. In the beginning, the firestorm built up this wonderful sexual tension between Quinn and Sara. But then just when I thought they were going to be consumed by their passion, it just sort of fizzled out. Once they finally came together, they became quickly preoccupied with the Pyr warriors and then the eminent conflict with the Slayers. Then just like that, the firestorm between Sara and Quinn was over and there was no denouement of their romance, which was very disappointing. I do plan on reading the next book in the series, however, because I really love the premise of the overall story arc of the Dragonfire series and think Ms. Cooke's writing is very good. I just hope the happily ever after for the next couple is followed through more satisfyingly.

Kiss of Fury is the next book in
Deborah Cooke's Dragonfire series
and will be available in August 2008.
It features Donovan, the Warrior.

Posted by Christine at 9:09 PM