A loving shout out to to my 'darling' California girl for sharing her ARC of Lover Enshrined with me. You've got great taste in authors and heroes, girl! I have such a blast reading books with you (across the continent) and discussing all the juicy bits and pieces along the way. You're the best, baby girl! MUAH! xoxo ;) 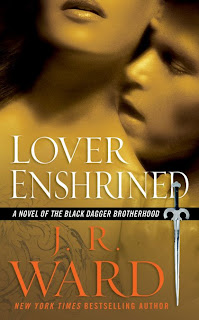 If you've been reading J.R. Ward's Black Dagger Brotherhood Series, a.k.a. the BDB, a.k.a. crack, you basically know what's going on at the onset of this book. Always acting the hero, Phury volunteered to take the role of the race's Primale away from Vishous so he (Vishous) could be monogamous with Jane. So as the Primale, Phury is supposed to save the race by mating with the forty Chosen so that more vampire warriors will be born to fight in the war against the Omega and his lessers. But there is a few problems. Phury took a vow of celibacy since way before his transition hundreds of years ago and is therefore still a virgin. Well sort of. There was that one time in the bathroom at ZeroSum a few months ago, but since he pulled out, he seems to think he's still somewhat of a virgin. Anyway, he's got another problem as well, and this one is really fucking him up and putting him in a bad place. Phury is a drug addict and it's not only affecting his relationships, which is sad in and of itself, but it's also interfering with his ability to do his job.

Since Lover Unbound was a somewhat controversial installment in this series, many followers of Ward's BDB series have been waiting with uncertainty for Lover Enshrined. While I certainly cannot predict readers' responses to this series, I can say with fair amount of confidence that Lover Enshrined will satisfy many a crack... errr... BDB addict. It is not Ward's best love story, as the romance between Phury and Cormia is somewhat overshadowed by so many other intense events that are taking place, yet the novel is a very well written and cohesive installment to this mesmerizing series.

Aside from the less than stellar romance (which still works, by the way--its just not super developed-- better than Jane & V, though IMHO), there are two hang ups I have with this book, one being significantly disappointing and the other being more of an annoyance. Fortunately both these line items take place in the first few chapters of Lover Enshrined, but thankfully I put these issues aside, and moved on because the rest of the story was intense and amazing, and I really loved it.

The significant disappointment occurs in the prologue and made me heave such a sigh that my hopes for the entire story's integrity almost plummeted to nothing. Without revealing all the specifics, a particular character basically goes back in time to oversee an important event (an event that said character had previously gone back in time to initiate), and then poofs back to present time once the character's mission is set in motion. *heave-ho-sigh* Why has this time travel ability never been revealed before? And most importantly, if this character had this ability all along, said character would have gone back in time to set many other agendas in motion way before this! And I'm sure said character would have done this more than once. Is this rule breaking? Or am I missing something? Hence, the disappointing sigh while reading the prologue. I read on, shelving this disappointment to work out later--or maybe even forget. Or at least forgive. Maybe.

Next up is the annoyance factor. Enter on scene, the Omega's new Forelesser. This dude annoys the hell out of me. Yes, he's a lesser, so I know I'm not supposed to like him. He has the worst grammar and vocabulary ever. It's bad enough that he speaks horribly, but Ward also uses this language when she narrates his scenes. *head desk* I found it rather annoying, if not insulting, that Ward describes him, his thoughts and his perceptions using the same atrocious language. I suppose she was just trying to get the reader into the mindset of the character, but it was a bit much. Again, thankfully it doesn't take long for the story to progress away from the specifics surrounding the Forelesser, so the language wasn't revisited too often after his opening scenes.

With that being said, however, I think that Lover Enshrined is possibly Ward's most intense and cohesive story yet. The character developments in Lover Enshrined are strong, natural and accurate extensions to the characters we already know and love. In addition, each character is well connected to the overall series story arc, and to each other, which really makes this novel so tight. After reading Lover Enshrined, you will feel like you know and understand many of the characters and their relationships more so than ever before.

At one time, I looked forward to seeing how Phury's mate would simply help him overcome his drug addiction and his martyr complex, but I got so much more than I expected from both Phury and his mate. Maybe their love story doesn't take center stage in the novel, but the impact both Phury and Cormia have on each other and on the entire vampire world is huge and wonderful... more so than any other couple within the Brotherhood thus far. Phury's addiction is sad, debilitating and dangerous, but forces him to confront his past, address the present and think about the future in ways he's never done before. Ward actually uses some really beautiful symbolism for this in one or two scenes. Cormia is a quiet observer, yet not afraid to verbalize her insight to those she cares about in a confident yet calming way. Despite the fact that the romance between Phury and Cormia is not super strong, their relationship develops realistically and their love for each other is believable, so it works for me.

There is also some long awaited resolution to Phury's martyr complex that involves his relationship with his twin, Zsadist. As one of the best continually developing characters in this entire series, Zsadist's role in this story as a secondary character is, as always, heart-wrenching and beautiful. It's truly no wonder he is still the most favorite Brother. Although after reading Lover Enshrined, I confess that Qhuinn is fast becoming my favorite. Okay, okay!... my equal favorite to Z.

The dynamics between the troika of John Matthew, Blaylock and Qhuinn are absolutely amazing. The bonds that these three vampires are forging as the series progresses are undeniably strong and genuine and their relationships are a literally a working definition of Brotherhood. Readers won't be disappointed with this troika-- they're fun, sexy, dangerous, and truly males of worth.

As expected, Rehv has a more visible role in this story and there are many new insights to this enigmatic half sympath, half vampire male of worth. For readers who don't quite get the appeal of this male, if you don't get it after you read Lover Enshrined, you're not really reading these books. He's already a hero in my eyes, albeit it a dangerous one whose stability is marginally kept in check, but a hero nonetheless. If you don't believe me, you'll just have to take a certain fallen angel's word for it. ;) He's extremely amusing and quite lethal....

Lover Enshrined is a fast paced, action packed, dark, heart wrenching, insightful, uplifting, and hopeful story.I truly laughed and cried and panicked several times throughout this book. Every single chapter contains many plot twists, insights and revelations on characters and plot --the kinds that fans of Ward's Black Dagger Brotherhood have been waiting for and will eagerly devour and savor. And you'd better savor this story, because the next novel in this world, Rehv's story titled Lover Avenged, isn't going to be released until May 2009 and you'll be dying for your next fix! *eep!* So far away.....

Although I haven't written reviews on J.R. Ward's previous books, in retrospect, I would give the novels the following grades. This way you can compare your feelings on the series so far to mine and get a better feel for what my grade of B++ for Lover Enshrined translates for you. See the post on my grading system for a more detailed explanation of the grades.


PLEASE NOTE: If you've read Lover Enshrined and want to leave a comment that contains a spoiler, please include ****SPOILER**** at the beginning of your comment so other visitors can avoid them, if they choose. Thanks! :)