What Happens In Vegas by Copeland, Bast, Dane and Tunstall 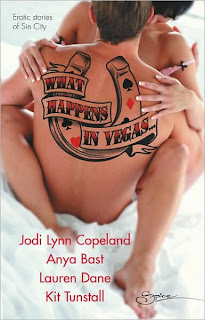 "Hot for You" by Jodi Lynn Copeland.
Carinna is a cocktail waitress at The Liege and doesn't do relationships. In fact, she recently broke up with her last boyfriend as soon as he proposed marriage to her. One night on a whim, Carinna decides to hit the poker tables at the end of her shift. She ends up sitting at a table across from her long time friend, firefighter Jack Dempsey, with whom she has barely spoken to since their one night stand four months ago. Now sitting face to face again at the poker table, the heat stirs between Carinna and Jack again and it doesn't take long before they're having smoking hot sex. While burning up the sheets is all Carinna is interested in, Jack has other plans. He'll turn up the heat, all right, but this time he's ready to win her for keeps.

"Hot for You" is a scorchingly hot and sexy romance. The story is told in the first person from both Carinna and Jack's points of view. This was a fun and clever way for the author to really get the reader into the heads of both characters and helped convey their emotions and intentions at every shift in the story. I quickly became vested in both characters emotional interests which I think made their happily ever after twice as meaningful to me. I am thoroughly impressed at how well Ms. Copeland developed her characters, conveyed an emotional and entertaining plot, and wrote several meaningful and erotic sex scenes all in one novella.


"Stripped" by Lauren Dane.
Dahlia Baker is a graduate student by day and a burlesque dancer at The Dollhouse by night. Nash Emery, the wealthy playboy brother of Dahlia's boss at The Dollhouse sees her dance one night and propositions her for a night of drinks and 'private dancing.' Dahlia not only turns him down, but puts him in his place. Of course he offers sincere apologies, but Dahlia is not so easily seduced. So Nash spends the next couple of months coming to The Dollhouse whenever he is in town and casually getting to know her. Finally Dahlia agrees to a date and their sexual chemistry is amazing. Still, Dahlia is cautious about the depth of her involvement with Nash. Namely because she has issues with their class differences, his playboy reputation, as well as the fact that she's always been misunderstood and mistreated because of her bombshell looks. It will take time, patience and trust before Nash is able to strip Dahlia of her defensive armor so that she'll let him into her heart.

"Stripped" is a hot and sexy and at the same time, a very romantic love story. The relationship between Dahlia and Nash developed at a believable rate and I really appreciated Dahlia's reluctance at starting a dating or sexual relationship with Nash after his insulting proposition. Not only was Dahlia's response realistic, but it forced the characters to get to know each other on personal and emotional levels, not just physical. This made the romantic element of their story ring true and their happily ever very sweet.

"Red-Handed" by Kit Tunstall.
Amy Gerard gets caught red-handed while cheating the Liege Casino by Roan Cavello, the casino's wealthy and intimidating owner. When Roan threatens to involve the authorities, Amy tries to strike a deal to keep herself from trouble. She suggests that she be Roan's companion for several weeks in order to pay off her debt. Roan agrees, as long as she agrees to be his submissive for the duration of their pact. Somewhat out of Amy's comfort level, but better than imprisonment, she proceeds with the deal, and surprises abound when both Amy and Roan's sexual and emotional boundaries are tested.


"The Deal" by Anya Bast.
Cassidy has spent the last year getting over being left at the alter by her ex-fiance. The last thing she wants is a relationship because she's not going to run the risk of ever getting hurt like that again. Working as a professional shill for the Liege Casino, Cassidy is starving for sex and finds herself hot for her best friend and Liege blackjack dealer, James Carter. When he proposes a "friends with benefits" relationship, she can all but resist him. Cassidy panics after their first rendez-vous, but James is not about to let her go. He playfully suggests five nights of blackjack--winner picks the sex act of the night-- all in order to break her down and find a way into her heart.

"The Deal" delivers plenty of fun, steamy sex in a heartwarming romance. Ms. Bast clearly conveys the friendship between Cassidy and James through both their dialogue and body language and it was enjoyable to watch their relationship slowly shift from friends to lovers. James' playful pursuit of Cassidy with his sexy win-win version of blackjack was creative and sinful. James' efforts to carefully win Cassidy's trust and love was just as convincing as Cassidy's reluctance to give in to his love. Both characters' actions and reactions were always realistic as was the final resolution of their love story, which made Cassidy and Jack's happily ever after truly heartwarming.

OVERALL GRADE: B+
CONTESTS!
I won't be giving away my copy, because I already know I'm going to be rereading this one whenever I'm in the mood for some sugar and spice. Which is often. But.....
For a chance to win a FREE copy of What Happens In Vegas, visit Ann Aguirre's blog here. Ann is running yet another fabulously generous contest, giving away FIVE copies to some lucky players!!! Ann will announce her winner on May 5.
AND.... Cynthia Eden is also giving away a copy of What Happens In Vegas here. Cynthia will announce her winner on May 6.
Posted by Christine at 11:37 PM