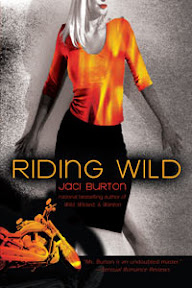 There's good reason why the cover to Jaci Burton's latest release, Riding Wild, is splashed with the color of flames... this book is on FIRE!
Riding Wild is a fast paced novel full of suspense, emotional and sexual heat between bad boy thief Mac Canfield and good girl private investigator Lily West. When Lily is hired to test the museum security protecting a high profile artifact, she witnesses its theft by none other than Mac, her bad boy crush of ten years ago who broke her heart. As Lily confronts Mac outside the museum, she becomes overrun with conflicting emotions as she has never truly gotten over him, and is disheartened as it appears he hasn't changed his bad boy ways after all these years. Not to mention she wants the artifact back. Mac is equally stunned to be face to face with Lily as he realizes the sweet, innocent girl-next-door he once knew has transformed into a strong willed, independent woman who can totally kick ass. As they deal with the shock of seeing each other, they come under fire by yet someone else after the artifact. As it turns out, things are not exactly what they seem--the artifact is more than just a piece of art, and Mac is more than just a thief. So in order to both preserve the secrecy of his mission and to keep Lily safe, he is forced to essentially kidnap her. Mac whisks Lily away on his Harley and she finally gets the ride on the wild side she always wanted.
Riding Wild is highly charged with emotional and sexual tension. Mac and Lily are unable to deny their stong, insatiable desire for each other and the sexual tension builds. The intense heat between them leads to extremely passionate, erotic sex and ultimately to the realization of the love they have always shared. Throughout this wild and sensual adventure, Mac and Lily work through issues of trust and troubled pasts, and in the process discover the true meaning of love and acceptance.
Jaci Burton expertly weaves this compelling story of secret agent intrigue and erotic romance and should not be missed. Riding Wild is the first novel in Jaci's new Wild Riders series, which means more tantalizing stories of sexy heroes riding fast motorcycles and souped up cars, dangerous missions and sensual romance. Riding Temptation is the next Wild Riders novel, due in October 2008, followed by Riding on Instinct, tentatively due in April 2009.
GRADE: A-
Posted by Christine at 8:11 PM