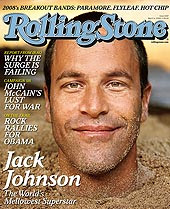 Oh, Saaaamaaaanthaaaaa!!! Well, well, well, what do you know? Look who's on the cover of the latest issue of RollingStone magazine. C'mon, you know you've been Sitting, Waiting, Wishing for his newly released album! I even saw it for sale at Starbucks this week! Surprised? Nah... you shouldn't be. This new album, Sleep Though The Static is currently #1 on the Billboards! That is, #1 on The Billboard 200, the Billboard Comprehensive Albums, the Top Digital Albums, and the Top Rock Albums!!! Go Jack!
Do You Remember the times you made fun of my fondness for the soulful sounds of Jack Johnson? Thinking I was a Flake? Well, girl friend, those days are Gone because in Times Like These, I obviously don't Walk Alone. There are millions of Jack Johnson fans. And someday... maybe someday... you'll be thinking to yourself, "If I Had Eyes, I'd be a Jack Johnson fan, too."
So tell me, did this news turn your world Upside Down or what? Don't worry... I know what would cheer you up. Come on over to my place, I'll fix you up some Banana Pancakes and expose you to some Sexy Plexi. You know you want some. ;o)
Go here to the Jack Johnson's website to the video section of this laid back surfer dude music artist. "If I Had Eyes" is from his new album. "Upside Down" from the Curious George movie is another of my favorites and the lyrics can apply to adults, too. :)
EDITED FOR CORRECTION:
From the Oxford American Dictionary:
flake |flak|
noun
1. a snowflake.
2. informal: a crazy or eccentric person.
Samantha has never called me a flake, especially in regard to definition number two. I really just wanted to use that song title in my post. However, I am like a snowflake.... unique and delicate. There's no one out there like me! :) ... but I'm not cold. ;p
And here's Jack Johnson performing one of my favorites,
Better Together:

Posted by Christine at 8:54 PM