I took my older girl scout troop camping this past weekend. Yup. You read that right. Camping. In February. In the beautiful Appalachian Mountains that roll through north western New Jersey.
Guess which car is mine? .... 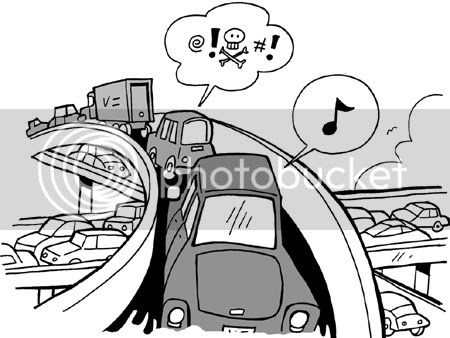 Inevitably, wherever you are driving to in New Jersey on a Friday afternoon or evening, you sit in traffic. So to help pass the time and control the volume of chatter and giggles that quickly turn to shrieks, I decide to play some music from my ipod using this handy dandy tape cassette thingy that lets me broadcast my tunes via the car speakers. One of the girls is a HUGE My Chemical Romance fan, and is thrilled to learn that I have a few (three) My Chemical Romance songs on my playlist. As the song starts playing, I remember that the song is the explicit version of I'm Not Okay. I should have skipped to the next song. But no. I can handle this. I tell them I will censor the single curse word in the whole song by simply turning the volume off for the few seconds it takes for the dude to sing it. No problem. I know the curse is at the end of the song, so after the first two verses, my fingers start lingering over the volume knob, and I'm saying, "Here... it's here, right?" Totally at the ready. The girls are saying, "No, not yet." Fingers twitching. I say, "I know its coming.... It's at the end... riiiiight NOW!" And I lower the volume totally off. Four.... three... two.. one. I turn the volume back up, but a slight slip sends the volume WAAAY up. In perfect time to hear the words, "I'M NOT O-FUCKING-KAY!" in full volume, louder than loud. Nice. All I can muster is "I'm so sorry." What else am I supposed to say? (In my head I was saying "Don't tell your parents about this," but I would never ever EVER tell a child to not to tell their parents something, so I guess "Sorry" will just have to do). The girls are in hysterics. "Mrs. A, you ROCK!" Which would normally be 'music to my ears', but not exactly in this context. *sigh*
Recall the instructions from the Snow Tubing trip two weeks ago when the girls needed to bring a brown bag lunch-type meal with them for dinner? Well, the same instructions applied for this trip. You know what's coming, don't you? Its now after 7:00 pm and we're a good 30 minutes from camp, so when the girls ask if they can start eating in the car, my daughter turns to me with a worried look on her face. "Mom?" Oh shit. How did I forget to pack us dinner... AGAIN? Poor kid. So this time, Mickey D saves the day. She got her crispy ranch chicken snack wrap and french fries. Sure beats the turkey on wheat I would have packed her if I had remembered, true? ;)

We finally get to camp, settle into our cabin, and head to the commons for some fun. When we get back to the cabin later that night, I run into a spot of trouble with my ski jacket. I can't unzip it. I zip it up a bit to unsnag it, but it's not caught on anything, and still won't unzip. Thankfully, I'm able to pull the jacket over my head, but as I try to determine the cause of its unzipability, I end up zipping the zipper all the way up. Stupid. Now the opening is too small for me to slip my head through. And none of the capable and resourceful girl scout leaders in our cabin is able to fix it. Which means I now have no coat for the next two days. So of course it snows Saturday. And Sunday. *big sigh*
The good news is that the theme for this camping weekend is Pajama Party. Which simply means some wholesome and relaxing girl time. The girls get manicures, bake cookies, sip hot cocoa, weave baskets (don't laugh... it was really cool. I made one, too!), have a snowball fight, make s'mores, act out an outrageously funny and original skit, build a snowman, and simply spend quality time with each other. So despite the slip with blasting the 'F' word to a car full of girl scouts, forgetting to pack my daughter and myself a dinner again, and being coatless, I'd say the camping was pretty awesome. :)
Posted by Christine at 11:53 PM