100 Books In A Year Reading Challenge 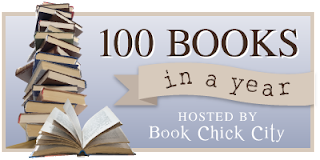 I've slowly increased the number of books I read in a year over the last several years, but I think I've found my magic number to be around 100, so I'm sticking with this annual reading challenge hosted by Book Chick City, but making my goal 101 books just because. :D

Last year's tally of 109 books includes 8 online short stories that were so short that I felt guilty counting them towards my total. Therefore, in my mind, I really only read 101 books in 2012. I think this is a challenging number of books for me to read in a year, a total which includes a smattering of graphic novels and novellas as well as a few re-reads. So instead of challenging myself to out-do my numbers from last year, I'm going to stick to an annual goal of 101 books, which may or many not count any books I re-read during the year. I'll track my progress both here and on goodreads, where I've joined the 2013 Reading Challenge again this year.

Favorite reads are highlighted in PINK!

12. By A Thread by Jennifer Estep
13. A Rogue By Any Other Name by Sarah MacLean
14. A Game For Swallows by Zeina Abirached
15. Crystal Cove by Lisa Kleypas
16. Metamorphosis [Franz Kafka] by Peter Kuper
17. The Governess Affair by Courtney Milan [RE-READ]
18. The Leopard Prince by Elizabeth Hoyt
19. On Every Street by Karina Halle
20. Promises in Death by J.D. Robb

21. Mercy Thompson: Homecoming by Patricia Briggs
22. The Serpent Prince by Elizabeth Hoyt
23. Wild Invitation by Nalini Singh
24. French Milk by Lucy
25. Any Man of Mine by Rachel Gibson
26. MirrorMask by Neil Gaiman and David Mckean
27. Tales of Outer Suburbia by Shaun Tan
28. Hearts of Darkness by Kira Brady [RE-READ]
29. Stardust by Neil Gaiman
30. The Lost Duke of Wyndham by Julia Quinn
31. Mr. Cavendish, I Presume by Julia Quinn
32. Spellbound by Nora Roberts

43. The Sigh by Marjane Satrapi
44.  Midsummer Nights Dream Graphic Novel [Shakespeare]
45. A Discovery of Witches by Deborah Harkness
46. First Grave on the Right by Darynda Jones
47. Shadow of Night by Deborah Harkness
48. Persepolis: The Story of Childhood by Marjane Satrapi
49. For I Have Sinned by Darynda Jones
50. The Great Gastby by F. Scott Fitzgerald

51. Sputnik Sweetheart by Haruki Murakami
52. Persepolis: The Return by Marjane Satrapi
53. Flowers From the Storm by Laura Kinsale
54. A Tale for the Time Being by Ruth Ozeki fiction
55. Demon Angel by Meljean Brook

79. The Fault in Our Stars by John Green
80. Beg For Mercy by Jami Alden
81. A Study in Scarlet: A Sherlock Holmes graphic novel
82. A Monster Calls by Patrick Ness
83. Relish by Lucy Knisley
84. Ghost World by Daniel Clowes
85. "Delilah Dirk and The Turkish Mark" by Tony Cliff

86. Baby's In Black by Arne Bellstorf
87. Coraline by P. Craig Russell and Neil Gaiman
88. Eleanor & Park by Rainbow Rowell
89. The Shadow of The Wind by Carlos Ruiz Záfron
90. Delilah Dirk and the Turkish Lieutenant by Tony Cliff
91. Fifty Shades of Grey by E.L. James