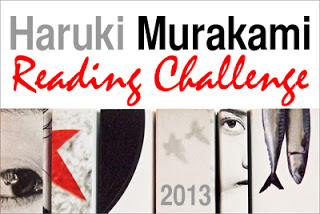 I have one more reading challenge to share. This will be my third year participating in this challenge. In 2011, I read After the Quake, a collection of three short stories by Haruki Murakami. I enjoyed it, but thought it was too small of a sampling of Murakami's writing to truly decide if I was a fan of this popular Japanese author. So I signed up for the challenge again in 2012, intending to read Sputnik Sweetheart, but the closest I came was to borrow the book from the library on December 20th! Alas, here I am ready to give it another go in 2013.

I am going to challenge myself to read one, but I'm hoping to read two. Sputnik Sweetheart and The Wind-Up Bird Chronicle, the latter chosen largely because I found a reader who is hosting a read-along later this year. I welcome the motivation to read this one with a group since it is a long one at 607 pages.

The No Stress, No Fuss, Read-Along of The Wind-Up Bird Chronicle by Haruki Murakami hosted by Ti who blogs at Book Chatter.

The twitter hash tag for the group read will be #winditup2013.

Have you read any books by Haruki Murakami? Which is your favorite?