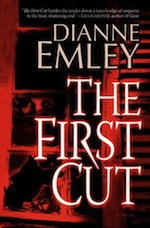 E The First Cut by Dianne Emley is the May book selection for the Authors by the Alphabet online book club for the author last name beginning with the letter 'E.'

The First Cut is the first book in the crime fiction thriller series featuring female police officer and single mother Nan Vining of the Pasadena Police Department. The story begins with Vining returning to the precinct for work after a leave of absence she required to recover physically and mentally from a brutal attack while in the line of duty that nearly took her life months earlier. Within minutes of entering the precinct, Vining is recruited to investigate the heinous murder of Frankie Lynde, a young, beautiful female cop with the LA Police Department whose naked and brutalized body is found dumped in an arroyo in Pasadena. While some of her fellow officers think this crime may hit too close to home for Vining, she views this case as the perfect opportunity to prove to her colleagues--and more importantly to herself, that she's ready and able to get back in the game.

To complicate Vining's return to work, she secretly suffers anxiety attacks whenever she enters unfamiliar houses. Sometimes these anxiety attacks manifest themselves in the form of hearing voices from both Frankie Lynde and T.B. Mann-- the name Vining and her teenage daughter have given to Vining's unknown attacker "The Bad Man" who remains at large.

The First Cut starts out a bit slow introducing the primary and secondary characters, establishing the crime scene and other information, all the while without any strong character developments or progress in the plot itself. Eventually, though, the pace picks up and the book quickly transforms into a very intense police procedural for a disturbing set of crimes that left me turning the pages as fast as I could just to make sure justice was served.

This book's strength is definitely in the thoroughness of the police investigation and the specific procedurals as well as in the grim and disturbing profile of the murderer and his accomplice. Revisiting the events that led up to the murder of LAPD officer Frankie Lynde and witnessing the perpetrator initiate a new crime against a new victim was both disturbing and suspenseful. The weakness of the book, however, is that I felt Officer Nan Vining's character was short changed in the development area. Yes, we learn about her attack by T.B. Mann and how it still affects her, we learn about her relationship with her daughter and bit about a male colleague with whom she used to be involved and we also learn what a competent and intuitive cop she is--all of which invites the reader to empathize with and route for Vining's success. Which happens for the most part, yet I feel like we could have and should have gotten more intimately involved with Vining's character to really know and connect with her. Since this is the first book in a series, I imagine Vining's character develops more in the subsequent stories making her character and her stories even more compelling.

I gave The First Cut three stars on goodreads for "I like it." The series shows great promise and I intend to read the rest of the books in the Nan Vining series.

For links to other reviews and the Q&A among the book club members, visit Paula's blog HERE.

If you're interested in joining the Authors by the Alphabet Book Club, visit Paula's blog at the SIGN UP post. All are welcome and participation is flexible. Come join the fun! :)
Posted by Christine at 10:38 PM