What I Read Last Month

Finally getting around to posting what I read last month. I'm kind of late, I know. Nath, go ahead and poke fun of me now. I deserve it! ;)

But first! I've been playing Words with Friends on my iPhone a lot lately, thanks to Linda and Lisa who both brought the game to my attention a couple of weeks ago. For those who don't know what that is, it's a Scrabble-like game app on the iPhone (and maybe on other smart phones, too?). Anyway, it is very, very rare occurrence for me to beat my husband at Scrabble. And Words with Friends. And pretty much most games. And sports... Last night, luck was on my side and when I got the following set of letters, I was thinking this had to be my game. [Check out my letters at the bottom of screen shot] 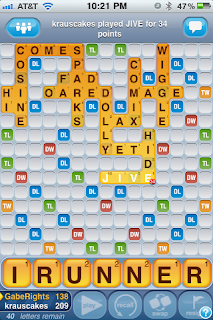 I RUNNER. What are the odds, right?

The nicest part is that I think he was just as happy that I won as I was. He's sweet like that. :)

Now about the books I read last month. I read a total of 7 books in May. Here's a break down of the genres:

I usually list my monthly books in the order that I read them, but this time I'm going to follow Hilcia's method of listing the books in order of favoritism.

1. Blaze of Memory by Nalini Singh A-

Another fantastic installment in the Psy-Changeling series, this is book #8. This story featured a Psy-Psy pairing. Dev Santos who is one of the Forgotten Psy who survive with others of his kind on the ShadowNet and Katya who is a pure blood Psy who has been tortured and broken by an elite and powerful member of the Council and programmed to infiltrate The Shine--an organization founded to find and help other Forgotten Psy with their psychic gifts. If you're not reading this series, you should!

2. My One and Only by Kristan Higgins B+

Yet another funny yet emotionally stirring contemporary romance that borders along the genre lines of chick lit from one of my favorite authors. The protagonist was a bit cold and harsh for liking in the beginning, but she sure grew on me as I learned more about her past and boy was I routing for her happily ever after by the end.

3. It Happened One Season by Stephanie Laurens et. al. B+

A charming historical romance anthology with misfit war heroes and atypical heroines in their final season. You can read my review HERE.

4. Remember When by Nora Roberts and J.D. Robb B+

A Nora Roberts romantic suspense about a diamond heist and a J.D. Robb In Death futuristic crime fiction story relating to the very same heist and families fifty years later. My review can be read HERE.

Slightly over the top in the believability factor, yet all the teenage emotional drama rang perfectly true in this fun and touching contemporary young adult novel about friendship and sexuality and broken hearts and love.

6. The First Cut by Dianne Emley B

A suspenseful crime fiction thriller lead by the female Pasadena police officer Nan Vining who has just returned to the force after recovering from the physical and emotional wounds of an brutal attack while in the line of duty. The story started out slow for me, but took off towards the end. I felt the characters were not developed to their full potential when I wanted to be emotionally invested in them, particularly with the protagonist, Nan Vining. I still may read the next book in the series as the series arc is promising. My review can be read HERE.

7. The Odyssey by Gareth Hinds A

A spectacular artistic interpretation of Homer's epic poem "The Odyssey" that can be understood and enjoyed by readers of all ages.

I realize it doesn't make any sense that The Odyssey is listed last when it has the highest grade. It's the combination of the beautiful illustrations and the classic epic story that makes this book stand out, but it didn't induce the same level of personal satisfaction as the other books this month.

June reading is off to a bit of a slow start. Not what I had in mind... but isn't it always the case that there's too many books, too little time?

Do you play Words with Friends?