I feel like I had some weak blogging mojo for most of May and now all of a sudden I have so much to share and not enough time to get it all up here. For starters, I have some library loot to share and a little anecdote about my {non} BEA adventure last week.

If you're a book blogger, you're probably aware that the Book Expo of America was held in NYC last week where thousands of authors, publishers, librarians, bloggers and others congregated at the Jacob Javits Center to promote and share books. I didn't go to the expo, but I did take the train in one evening to meet my friend and fellow blogger Michelle from Red-Headed Book Child dinner. Michelle and I met through our blogs and then in person over a glass of wine last year when she attended BEA, having trekked to NYC all the way from Minnesota! This time we made sure we took the time to linger happily over martinis and dinner. It was SO nice. And the Lychee Martini I had was mm-mm delicious. On my way to meet Michelle, I literally bumped into my friends Ana and Thea, co founders of the awesome The Book Smugglers blog, while passing each other on the a sidewalk somewhere between Penn Station and the Jacob Javits Center. Isn't that crazy? Talk about being in the right place at the right time... we probably couldn't have arranged to meet like that if we had wanted to! THEN, after I met up with Michelle and we walked in the opposite direction, we bump into my friend Nancy who blogs at the Ravenous Reader. This is all within 30 minutes of stepping out of Penn Station. Just goes to show that it is indeed a small world after all. Even in New York City. ;)

Now for my library loot. I did an unexpected drive by loot at my library yesterday. TWO books for which I had a hold request became available and so I squeezed in the shortest library visit ever into my evening last night when I had to pick my daughter up from an activity next door to the library. I literally walked in to the library with my card in my hand, asked for the two books at the desk, checked them out and left! I would be very surprised if I was in the building longer than three minutes. It was difficult to turn my back on all those books just waiting to be considered, but I had no time to do so. I am not liking these abbreviated library hours, I can tell you that! 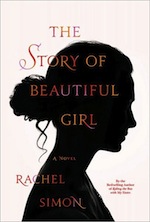 The Story of Beautiful Girl by Rachel Simon

I first heard of this new book on goodreads several weeks ago and knew I wanted to read it. I read the first chapter (20 pages) last night as soon as I got home and already my heart was being squeezed and wouldn't you know... a few tears were shed. I'm going to keep a tissue box handy when I read this one.

From the inside flap:

" It is 1968. Lynnie, a young white woman with a developmental disability, and Homan, an African American deaf man, are locked away in an institution, the School for the Incurable and Feebleminded, and have been left to languish, forgotten. Deeply in love, they escape, and find refuge in the farmhouse of Martha, a retired schoolteacher and widow. But the couple is not alone-Lynnie has just given birth to a baby girl. When the authorities catch up to them that same night, Homan escapes into the darkness, and Lynnie is caught. But before she is forced back into the institution, she whispers two words to Martha: "Hide her." And so begins the 40-year epic journey of Lynnie, Homan, Martha, and baby Julia-lives divided by seemingly insurmountable obstacles, yet drawn together by a secret pact and extraordinary love. "

I cannot pass this one by. 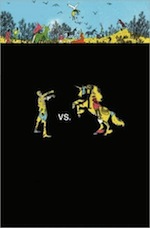 Zombies vs. Unicorns by Justine Larbalestier and Holly Black

I'm going to read these stories and decide the winner myself. Team Zombie or Team Unicorn? I'm saying unicorns. Zombies are too disgusting to be compelling. Blech.


What team do you choose? Team Zombie or Team Unicorn?