I grabbed these first three books for my youngest daughter. She's a picky reader and has just come off a streak of reading a whole bunch of books and now nothing appeals to her. We can all relate to that, right? Now if I suggest these books to her, she won't read them. If she finds them just laying around on the coffee table, however, she might just pick them up. Or maybe I will!

A Corner of the Universe by Ann M. Martin (2002)
A Newberry Honor Book. Another book set in a small town community, Hattie Owen's world gets turned upside down when her Uncle with mental disabilities arrives.

Guitar Girl by Sarra Manning (2003)
Seventeen year old Molly Montgomery learns about the cost of fame and stardom when her band, The Hormones gets a big break.

These three young adult novels are my picks. The first is a re-loot.

Jellicoe Road by Melina Marchetta (2006)
A Michael L. Printz Award For Excellence in Young Adult Literature Book.
Abandoned by her drug addict mother at the age of eleven, high school student Taylor Markham struggles with her identity and family history at a boarding school in Australia.

Naomi & Ely's No Kiss List by Rachel Cohn and David Levithan (2007)
I've read two books by this author team--Nick & Norah's Infinite Playlist which I read in 2008 and thought was decent, and then more recently Dash & Lily's Book of Dares which I absolutely adored, so it seemed logical to pick up this one, published in 2007.

Although they have been friends and neighbors all their lives, straight Naomi and gay Eli find their relationship severely strained during their freshman year at New York University.

Marly's Ghost by David Levithan (2006)
While exploring the shelves for more books written by David Levithan, I spied this one and thought it sounded cute. It's basically a modern day twist on The Christmas Carol set on Valentine's Day.

The spirit of Ben's girlfriend Marly returns with three other ghosts to haunt him with a painful journey through Valentine's Days past, present and future. 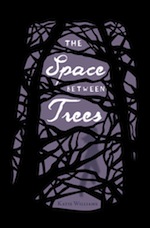 The Space Between Trees by Katie Williams.

I sought this book out after having read a review by Ana of The Book Smugglers last fall. I was next in line on the holds list for it at the library for literally months and it finally came in-- surely the person who had it out surely paid beyond what it cost in overdue fines. Anyway, I just finished reading it yesterday and am still mulling it over. The book is very well written and I think very highly of it. I'm just trying to decide how to effectively explain why it's such a good book when the story left me feeling kind of sad and lost. 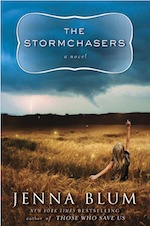 The Stormchasers by Jenna Blum
I read this book last week for the Authors by the Alphabet Book Club that I'm in hosted by Paula at the blog called Tome's Devotee. This is the book chosen for the letter 'B.'

This is a story about a set of twins--one who is bipolar and the other who is not-- who haven't seen each other for twenty years and the consequences of their harboring a dark kept secret all that time and how this secret has affected them and their relationships with others and each other. It also creatively uses storms--specifically tornadoes-- as a metaphor for the mental cycles of a bipolar individual. 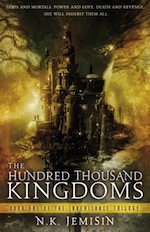 The Hundred Tousand Kingdoms by N.K. Jemisin
Book One of the Inheritance Trilogy

I don't have a Library of Congress summary for this one, but on the cover it says this:

Gods and Mortals. Power and Love. Death and Revenge. She will inherit them all.

I know nothing else about this book, but I have been curious about it for a while and it happens to be the January reading selection for the Women in Fantasy 2011 Reading Club hosted by Erika at the blog Jawas Read Too in which I hope to participate even though I still haven't officially signed up. I guess I feel a little out of my element signing up for a fantasy book club when I don't read a lot of straight fantasy, but I'm really intrigued by the titles selected for the year. I'm still hoping to just bite the bullet and join! I guess borrowing the book from the library this week is one step closer to joining. ;)


Have you read any of these books? Thoughts? Opinions? :)
Posted by Christine at 5:29 PM