Of what do you think when you hear the word loot?

This week, my library loot is definitely feeling like pirate loot, because I practically stole books from my library! Okay, not literally, but it sure feels like it! I went to my library's used book sale last weekend where the going rate was $8 for all the books you could fit in a paper grocery bag! I am seriously efficient at packing a grocery bag. Check out all that I brought home for only eight bucks: 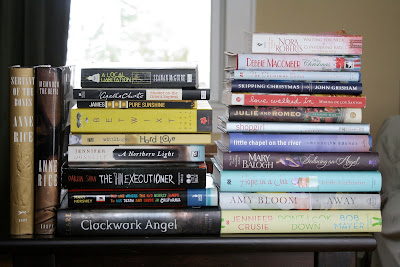 Because for some reason I have been on an unofficial quest to acquire a complete set of Anne Rice's Vampire Chronicles and The Lives of the Mayfair Witches in hardcover {in used condition}. Rice's Vampire Chronicles are practically considered classics in vampire literature. Not quite considered as such compared to Stoker's Dracula, but nearly classic nonetheless. Years ago, I found several of Rice's hardcovers at a used book sale for dirt cheap and decided they'd make a great addition to my personal library. Besides, they have great cover art and the spines looks gorgeous on a bookshelf. Then I acquired a few more when my friend Mariana was cleaning out her personal library. I think I have only two or three to find to complete my set.

The next stack of books are nearly all young adult novels, except for the two at the top.

From bottom to top:
Clockwork Angel by Clarissa Clare
The One Where The Kid Nearly Jumps To His Death And Lands in California by Mary Hershey
The Thin Executioner by Darren Shan
A Northern Light** by Jennifer Donnelly
Hard Love** by Ellen Wittlinger
Betwitxt by Tara Bray Smith
Pure Sunshine by Brian James
Murder on the Orient Express by Agatha Christie
Local Habitation by Seanan McGuire


The last stack of books consists of a few literary fiction, chick lit and romance novels along with a few Christmas themed novellas.

From bottom to top:
Don't Look Down by Jennifer Crusie and Bob Mayer {duplicate}
Away by Amy Bloom
Hope in a Jar by Beth Harbison
Seducing an Angel by Mary Balogh
Little Chapel on the River by Gwendolyn Bounds
Shopgirl by Steve Martin
Julie and Romeo by Jeanne Ray
Love Walked In by Marisa De Los Santos
Skipping Christmas by John Grisham
The Christmas Shoes by Donna VanLiere
When Christmas Comes by Debbie Macomber
Waiting For Nick & Considering Kate by Nora Roberts

Anything there that you've read or sparks your interest?