Interested in joining the In Death Series Reading Challenge? Anyone is welcome to join in at any time of the year at wherever in the series you currently are. See the sign up post HERE and join the fun.

CHALLENGE PARTICIPANTS:
Link up any In Death posts you made this month at the bottom of this post. If you made a post on your blog whether it be a review or commentary, please grab the link to your post and enter in the Mr. Linky below along with your name so we can find each other's latest In Death posts easily.

If you're reading or rereading without documenting it on your blog, let me know in the comments which book(s) you read in this month. This will also help me keep track of who's eligible for the challenge giveaway in December!

NOTE: In order to be eligible for the challenge giveaway in December 2010, you must have read four In Death books between September 1, 2010 and December 31, 2010 and have documented that you have either on your own blog or on my blog within the comments of the monthly In Death Reading Challenge posts. 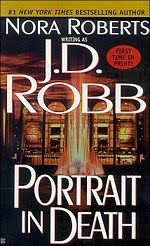 It's August 2059 and the sweltering heat and humidity in New York City is making everyone edgy and short tempered. Lieutenant Eve Dallas, the NYPSD's lead homicide detective, discovers the body of a young woman who was killed and stuffed into a dumpster in an alley downtown after Dallas' friend and TV news reporter Nadine Furst received an anonymous tip and a set of portraits of the victim. The young woman was a pretty, wholesome college student with a solid family life and a bright future ahead of her. Soon a second young life is taken in a similar fashion, this one also tipped to Nadine Furst and also accompanied by a set of portraits. Eve and her investigative team race to solve the crime before more young lives are taken, which proves to be difficult as the victims had only their youth and vitality in common, their occasional visits to data clubs frequented by college students, and that they were both recently photographed professionally.

On the personal level, Roarke meets the head crisis counselor at Douchas which is the center recently established for battered women, funded by Roarke and Eve under the direction of their trusted friend Dr. Louise Dimatto, and this counselor shares some startling information with Roarke about his past. At first, Roarke denies the plausibility of these allegations, but he cannot ignore the possibility that they may be true, so he investigates them on his own, the results of which turn his world upside down. Speaking of upside down, Summerset takes a serious fall on the stairs of their home hours before he is to leave for a three week vacation. He's hospitalized and then released to recover at home with a full time nurse attending him. Needless to say, everyone's world falling apart, and ironically, it's Eve who keeps "their family" from falling apart in all this mess.

The crime fiction and personal components were very well balanced in this installment. I was also rather glad that Eve and her team handled this investigation almost entirely without Roarke posing as their civilian consultant. Portrait in Death also pleasantly surprised me with it's emotional impact The murder mystery was decent on its own merit, but I think it was improved upon by the way it tied so well with the personal issues going on in Eve and Roarke's world in this story. Also, the denouement of the actual capture of the murderer was one of the more exciting ones. The new revelations about Roarke's past and how it threw Roarke for a loop, nearly pushed he and Eve apart, but in turn brought them together in such a beautiful way, was definitely a highlight of this novel. There was plenty of emotional punch with these discoveries and consequently some very emotional and sweet moments between Eve and Roarke. It was especially striking to see Roarke so vulnerable and off his mark and Eve the one grounding him. There was also a tender albeit stark scene in which Eve has to tell someone she knows that their loved one has been murdered and brings him to the morgue to identify the victim. Very heart wrenching and made me admire and love Eve all the more.

On the lighter side of things, Portrait in Death had some one liners and small scenes that made me smile and giggle out loud--often right in the middle of a scene that already had me shedding some tears over a serious emotional moment. I love when a book does that to me. For example, in one scene, Roarke, who is in Ireland at the time, calls home to check in with Eve and he is piss drunk-- a tremendous rarity for the man who is always in control. Eve has never seen Roarke foolishly drunk and gets a little worried for his safety.

"West?" She got an image of cattle ranches and mountains and long, empty fields. "Where? What, Montana?"

He laughed until she'd thought he'd burst. "Christ, is it any wonder I'm besotted with you? West in Ireland, my darling, darling Eve. [...] "

To someone who doesn't read this series, maybe this scene isn't very amusing, but if you know Eve, you know how easily she is freaked out by anything to do with nature and countrysides--heck anything outside of a city. And then there's Roarke who never gets sloppy drunk and off his game. Even though he's the one being a bit foolish, she's the one who panics about the countryside and thinks Montana when he's in Ireland saying he's going west in the morning. LOL!

A moment or two later in their conversation, Eve hears a loud crash in the background and asks Roarke what it was.

"Ah, Brian's down, and appears to have taken a table and lamp with him. Passed out flat on his face, poor sod. I'd best go try to haul his ass up and into bed. I'll ring you up tomorrow. See that you take care of my cop. I can't live without her."

"Take care of my drunk Irishman. I can't live without him either."

He blinked those blurry eyes in confusion. "What, Brian?"

"Oh." He grinned at her again, so foolishly her throat burned. "That's good then. Makes us even. 'Night now."

"Good night." She stared at the blank screen, wishing she could just reach through it and haul him back to where he belonged.

I love that scene. It's all sweet and romantic and they make me laugh. :)


Eve is a smart, complex woman who continues to delight me in every installment. She makes think when she's on a case, she makes me laugh and she makes me cry. I enjoy watching her evolve as she grows as a detective, a friend, a colleague, a wife and as an individual. Sometimes gracefully and at other times rather clumsily, but she always owns it and I admire her for that.

I love how Eve is naive about a lot of things in history from the early 21st century, anything to do with babies, nature, or anything outside of city life. How she doesn't know about so many things she ought to have learned as a child like games, treats, movies, literature, etc. It's heartbreaking to know Eve missed out on childhood entirely, but at the same time often very funny when Roarke makes reference to something and she's clueless. Like when he teasingly suggests they play Cribbage to pass the time alone together and she gets suspicious that it's some sexual game. Of course, it's even more amusing when Roarke laughs at her and doesn't bother to correct her. At least not straight away.

What are some of your favorite things about Eve?

Is there a particular scene that you find amusing on Eve's behalf?

Posted by Christine at 4:50 PM