I had intentions of sharing a few Halloween themed posts here last week for the days leading up to and including Halloween, but life happens and I had some wicked busy days that kept me from blogging. Now it's days after the fact and I sat here debating whether or not to follow through with them at this point. For example, I had a post nearly prepared titled, "How to sew a Powerpuff girl costume without a pattern." I did that last week. Three times, actually, because you can't have Blossom without Bubbles and Buttercup, right? I even have some of the instructions typed up already and have photos to go with the instructions, too. But who wants to know how to sew a Powerpuff girl costume in November? No one, right? So that post isn't gonna happen.

Instead, I'm just going to share a few photos from Halloween weekend.

As I've shared before, my teenage daughter has developed a passion and creative talent for photography this year. Over the weekend, I took her up to the reservation for some fall foliage photo opportunities. She brought along a friend which I should have known instantly changed my role in this trip from companion photographer to mere chauffeur. I drove them to the head of a trail that goes around a lake and we weren't even ten feet from the car and my daughter's asking, "You're not really going to go with us, are you?" I looked down at my camera hanging around my neck ... "Well, actually... " and before I said anything else, I realized that even though this was my idea to come up here together, it's not the mother-daughter outing that I thought it was going to be. So when we get to the part of the trail that goes around the lake... I went one way and daughter and her friend went the other way. :(

Here are some photos I took on my solitary walk around the lake... 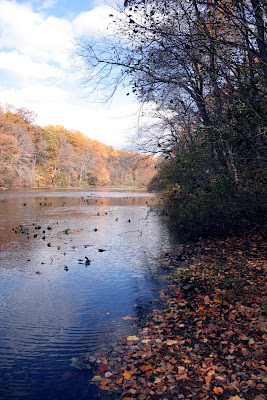 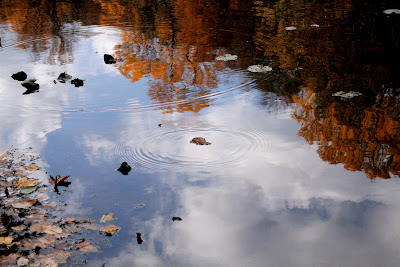 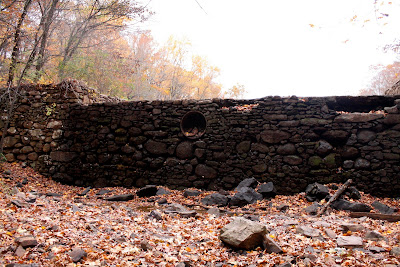 I took the photo above from the end of the lake.  The lake is above that stone wall, the water level of which is low at this time of year, but during heavy rain and snow melt, the river would overflow at this point into the stream bed in which I'm standing to take this picture. 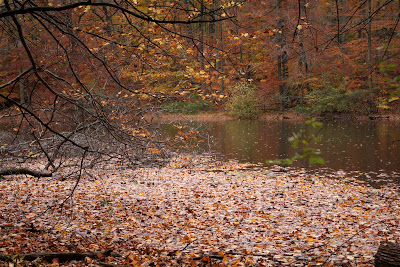 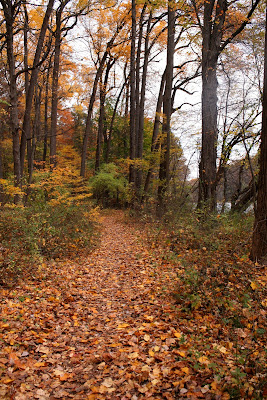 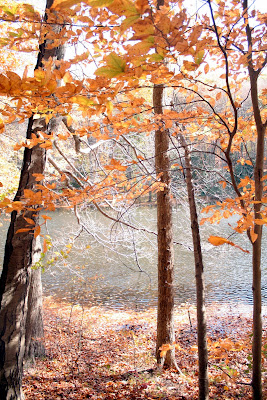 Most years, we try to make a family event out of driving to a farm, going on a hayride to the pumpkin patch to pick our pumpkins, displaying them on our stoop for a week or so before carving them for Halloween. This year found us at the farm stand down the street ten minutes before closing time on the night before Halloween, picking a pumpkin from a selection of pumpkins laid out on wooden pallets. We didn't even get to carve it that night, but on Halloween afternoon. Talk about last minute! At least it was finished by nightfall. 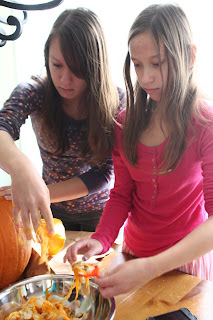 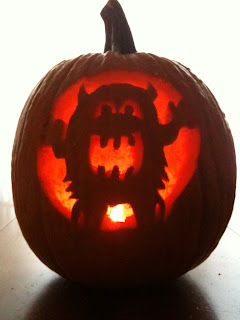 Li'l Monster Pumpkin
Photo credit to my husband
taken on his iPhone
I later escorted the Powerpuff girls--Buttercup, Blossom and Bubbles trick-or-treating. I barely got them to stand still for a picture as they were on an important mission... get as much candy as they could before they froze. It was a very chilly Halloween this year, but they managed to trick-or-treat for over two hours. ^_^ 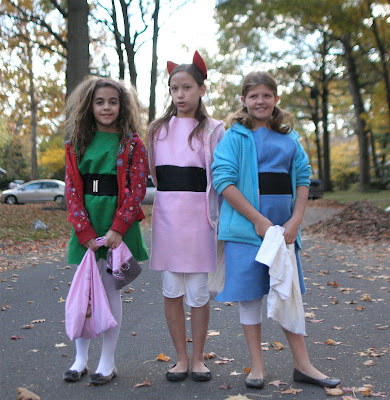 The Powerpuff girls...
Buttercup, Blossom and Bubbles :)
Pretty Kitty   :)
My eldest daughter left for trick or treating while I was out with the Powerpuff girls, so I didn't even get to see her before she went out. Fortunately, my husband snapped a photo of her with his phone before she left.

I guess two hours was the chill factor threshold for trick-or-treating this year, because my eldest and her friends lasted about the same amount of time before they called it quits, too.

I don't know how it is where you live, but in our area a lot of teens in high school still go trick-or-treating. When I was a kid, most of us stopped in middle school! I used to think that teenagers were too old to be trick or treating, but now I think it's kind of nice that they're still interested in having some wholesome fun. But I still expect to hear "Trick-or-Treat" and "Thank you" when they ring the doorbell!

How old were you when you stopped trick-or-treating?


If you live somewhere other than the US, do kids trick-or-treat in your country?

Posted by Christine at 4:13 PM