This is the round up post for the fifth month of the In Death Reading Challenge. It's going to be a shorter monthly post than usual at the moment, because I'm too exhausted from a busy and long weekend to write a full post, and it would drive me batty if May's challenge was posted in June, so I'm getting something up for now. I'll come back and edit this post tomorrow and include a few words on my monthly In Death read as well as a discussion topic of sorts.

In the meantime, link up any In Death posts you made this month here. If you made a post on your blog whether it be a review or commentary, please grab the link to your post and enter in the Mr. Linky below along with your name so we can find each other's latest In Death posts easily. 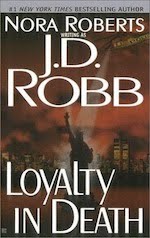 Loyalty In Death by J.D. Robb
In Death series, Book 10

The year is 2059 and a terrorist group calling themselves Cassandra is terrorizing New York City, planting bombs in the city's most treasured landmarks, and making demands for money and the release of various political prisoners Cassandra refers to as heroes, all through letters delivered directly to the city's toughest police detective, Eve Dallas. Eve is also investigating two other seemingly unrelated homicides while racing to determine the individuals behind Cassandra and stop them from destroying her city and the people in it whom she has sworn to protect.

Loyalty In Death is another great installment in the In Death series. The crime fiction is well drawn, suspenseful, and dramatic as some of New York City's most beloved landmarks are targeted and innocent lives are lost. Loyalty In Death was published in October 1999, yet reading it now, after the events of 9/11, the crime aspect of the novel was even more affecting in light of the fall of the twin towers that claimed the lives of real people in my community, so that devastation and traumatic loss of life is all too real. In light of this serious resemblance to grave real life events, Loyalty In Death perhaps made me laugh out loud more than any other installment so far. It also offered some genuine familial comforts as Peabody's Free Ager brother shows up in this book and I was also very happy to see another intimate relationship develop in the story line in addition to Eve and Roarke's. Please use ***SPOILERS*** in your comments if you chose to mention it there.

Overall, I thoroughly enjoyed Loyalty In Death and am anxious to continue reading Witness In Death. I already read the first couple of chapters.

This one is from Eve's perspective as she observes Peabody and her brother Zeke interacting.

"Why didn't you tell me you were coming to New York?" Peabody demanded.
"Wanted to surprise you. Didn't know I'd come until a couple of days ago."
He stroked a hand over her hair in a way that had Eve think of relationships again. Some weren't about sex or power or control. Some were just about love.

I found this small scene rather poignant. Although Eve is discovering more and more about relationships that are about love--both romantic and platonic, something like this love between Peabody and Zeke is something she is becoming cognizant of for the first time, yet will most likely never feel for herself.

Much later in the book, Eve and Roarke are in the midst of rubble of a bombed building doing what they can to help the survivors and find the dead, when Roarke has a revelation of sorts when he realizes that he uses his money and business prowess to serve justice to the world whereas Eve uses her skills as cop to serve, both doing what they can to make the lives of others better than the lives of their pasts.


He had the power to see that this was rebuilt, that it was put back as it had been. He could put his money and his energies into that and see it as a kind of justice.
And Eve would look to the dead.

What are your favorite quotes or scenes from the series?

Please indicate which book it is from at the beginning of your comment so that others can avoid spoilers. Thank you.