1. Be signed up for the In Death Reading Challenge in this post HERE either with Mr.Linky or in the comments if you do not have your own blog.
2. Have read FOUR In Death novels between January 1, 2010 and April 30, 2010. Actually, let's make that by May 7, 2010 to allow any stragglers to catch up.
3. Have documented the In Death novels you have read for the challenge by:

Pretty simple. You read four In Death books, leave me proof, and voila! You're in the drawing. 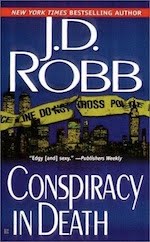 Conspiracy In Death starts out with Eve investigating the death of a homeless man on the streets of futuristic New York City in the middle of winter. The man's death is unusual because he was found dead in his own crib with his heart carefully and expertly removed in a surgical manner. While on the scene, Eve has a heated confrontation with one of the first officers on the scene, a female cop named Ellen Bowers who creates all kinds of trouble for Eve, including filing official interdepartmental complaints about Eve.

Soon another body is discovered, this time a licensed companion (legal prostitute) who is perhaps past her prime, is found with one of her vital organs also surgically removed. With the help of Eve's investigative team, other victims in other cities around the world are discovered and possible scenarios and leads are being explored. In the meantime, Eve and officer Bowers continue to cross paths with horrendous results, putting Eve's badge on the line and interfering with Eve's ability to capture the serial murderer.

I can see why Conspiracy In Death is a favorite by many fans of the series. Eve is under tremendous pressure in this murder investigation and exposes her vulnerabilities more than any other story so far. The murderer is most likely one of the world's best surgeons who most likely has the support of some powerful politicians. Making matters worse is this screw up of a cop Ellen Bowers whose goal is to make Eve's job and her life as miserable as possible--and she damn well near succeeds. It was fascinating to watch Eve deal with this pressure and these tremendous injustices that took a stab at the very core of what makes Eve who she is-- a survivor, a fighter, and a deliverer of justice for the dead. Not to mention how far she'd go to deliver that justice and solve these crimes. I was surprised about some of that, actually.

So far, each story offers a solid murder mystery--some a bit more transparent than others, but basically they've all been interesting and well paced, and each offering some new slant to futuristic crime. It's also simply so much fun to observe the various relationships developing between all of the characters. As their relationships get more established, their personalities are becoming more evident and Eve struggles with accepting that she now has a circle of friends who care about her... and for whom she cares as well.

Have you noticed that nearly everyone who comes into Eve's office--whether it be her home office or her office at Cop Central-- takes advantage of the fact that her AutoChef is always stocked with real coffee.
If you had an AutoChef, what would yours offer in never ending supply?
NOTE: Please mark your comment with ***SPOILER*** if you are going to mention something about the characters, series or plot that may be revealing. There are some participants who are reading the first couple of books. Thanks! :)
Posted by Christine at 2:35 PM