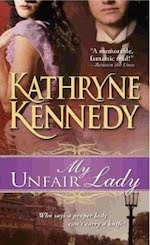 My Unfair Lady is fun and romantic version of the play Pygmalion that takes place in Victorian England featuring a young American heiress named Summer Wine Lee and Byron, the Duke of Monchester.

Summer Wine Lee was raised in the wild west of Arizona where her father dedicated himself to mining in hopes of making a fortune. During this time, Summer lived free, befriending an Apache Indian, learning skills such as stealth, hunting, caring for animals, and how to defend herself. Free from the restraints and expectations of gender and social class, Summer is somewhat of a free spirit. She is kindhearted and respectful, but definitely a free spirit and pretty much oblivious of how a lady is expected to behave.

Summer's father achieves his fortune and they move to New York City where Summer meets a young man named Monte with whom she falls in love. His family, however, determines she is not good enough for Monte and forbids their betrothal. Determined to be accepted by Monte's family so they can marry, Summer goes to London with her best friend, Maria to learn how to be a proper lady and with hopes of being presented to the Queen herself.

Once in London, Summer hires the impoverished Duke of Monchester, Byron, to be her sponsor and mold her to the perfect lady and also hopefully present her to the Queen. The duke is a cold and rude man who maintains his place in society through his friendship with Prince Albert. He also happens to detest American heiresses who think they can come to England and essentially buy titles from his countrymen. Yet he accepts Summer's offer in part because she is not seeking a British title as she has already promised herself to a man back in New York, and also because she will provide the duke with many entertaining anecdotes for him to share with the Prince.

Byron proceeds to attempt to teach Summer the ways of a proper lady. He accompanies her on many outings including dress shopping, balls, horse races, and even a trip to the summer home of the Prince where they partake in a foxhunt and hunting for birds. Just as her name suggests, Summer slowly warms the cold duke's heart with her honesty, humor, kindheartedness and curiosity. She amuses him to no end and he soon finds himself falling in love with her and not wanting to change a single thing about her. Of course, she is falling for him as well, yet refuses to break her vow to Monte in America and besides, the duke is adamant about never marrying at all, let alone an American!

As the story unfolds, both Summer and Byron learn so much about themselves, each other and their families that make them rethink the simplicity and importance of just being yourself and loving yourself just the way you are.

My Unfair Lady is a sweet, fun romance. Summer is a charming blend of innocence and independence and always acts out of the goodness of her heart. She is free spirited by way of her openness and honesty, and comes across quite wild by the way she always carries a knife strapped to her calf and her affinity for wild animals, but is more genuine and kindhearted than any other titled lady in the book. Byron is cold and rude, but that's just a front he's learned to maintain in order to live up to his title and what society expects of him. I loved the way Summer so naturally and unintentionally brought out the best in him, making him laugh and care about things he'd long neglected or forgotten. In turn, Byron taught Summer that she is worthy of love and acceptance by just being herself and she should never try to change for anyone. And isn't that a lesson worth learning and living by for everyone who wishes to live happily ever after?
Posted by Christine at 11:51 PM