As some of you know from my earlier posts this week, my youngest daughter has been home with the flu this week and since she's such a good sharer, she gave it to me. I was pretty miserable Tuesday and Wednesday but thankfully, I'm feeling a lot better today and even accomplished a few things. I did a load of laundry, unloaded and loaded the dishwasher, returned some library books including one that was due on Monday and for obvious reasons I didn't get out to return it, and last but not least, picked up this week's co-op share. Now I'm ready for a nap.

But first, I want to share what came in this week's order. I still have the two heads of lettuce in my fridge from the previous order so I traded this week's lettuce for two ears of corn with my friend. Believe it or not, the lettuce from two weeks ago is still fresh, although I will be eating it over the next few days before it does start to spoil. I use Evertfresh bags for my produce and although the bags are a bit expensive, they can be reused many times over and they really work at keeping your produce fresh for a long time. So in the end they're cost effective for me. 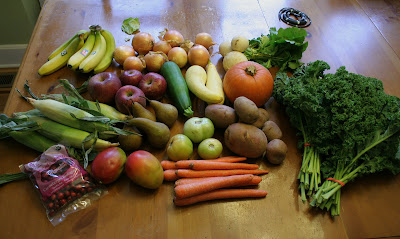 My mouth was watering just handling the mangos. It's probably my body craving the Vitamin C since I've been sick, so I'll be having those tonight for sure. Actually, I think I'll go cut one up right now and eat it at the counter so I don't have to share it. :)
Posted by Christine at 4:45 PM