The Bumblebee and The Thug 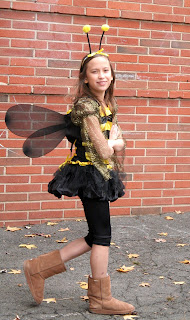 Once upon a time (the other day) my tween dressed up as a Bumblebee for Halloween. On the day before Halloween, she went home for lunch with her best friend for pizza and to change into their identical Bumblebee costumes. They headed back to school for the Halloween parade and discovered a swarm of Bumblebees! At least a dozen other Bumblebees were there, too! Who knew Bumblebees were so IN this year?

The next day was Halloween, and my Bumblebee had vague plans to trick-or-treat with two of her friends later that day, but as the day went by, she started to come down with something. By late that afternoon, she decided on her own that she didn't feel well enough to go trick-or-treating at all. We stayed in and watched a movie instead.

Once upon a time (very recently) my teen had been going back and forth trying to decide if she was going to dress up for school at all let alone trick-or-treat. It was an odd feeling that perhaps for the first time since she was a baby of 6 months, there was a possibility she wouldn't even participate in Halloween? How could that be? She was my little ladybug, ballerina, Dorothy, princess . . . all those years of adorable costumes, and a few years of some scary and morbid ones, and all of a sudden she was potentially too grown up to dress up? :(
Then, on the night before they were allowed to wear Halloween costumes to school, I was cleaning up the kitchen while my teen was at the dining room table finishing homework, and I overheard her half of a telephone conversation with her best friend. This was at 10:30 pm.

LOL! I thought that was adorably funny! She looked it up and once she understood what a thug was, they discussed costume ideas for few minutes, and then decided not to dress up for school the following day after all.
They did get dressed up on Halloween, though, and were the cutest thugs ever. They both wore dark jeans, black long sleeve shirts, dark ski hats and black gloves. They put some black face faint under their eyes and carried a pillowcase for their loot! They actually looked more like robbers, but still. Cutest thugs ever!

It turns out it was pouring by the time the girls and their friends met up to go trick-or-treating, so they hung out at one of the other girls' house for the evening and only came home with a handful of candy. I think this might be the first year we won't be bingeing on Halloween candy for days on end.

And that is the story of The Bumblebee and The Thug.
The end.
Posted by Christine at 10:59 PM