I had such an energetic morning today. Since I started that biweekly fall run class several weeks ago, I haven't been going to my usual Tuesday morning Zumba classes or my Thursday morning spin classes. This week, I decided to live by the simple, yet effective Nike motto and just do it. I went to Zumba Tuesday evening after running in the morning and today I went to 6 am spin class and then to run class from 10:30-11:30 am. We met at a different park today for the run class and ran 4 miles, which is the most I've continuously run in oh, maybe forever Interestingly, the third mile was brutal and then all of a sudden the fourth mile was done.

I guess the class is working at improving my endurance, but I have to say a lot of my success these last few weeks is most likely due to running in a group with these seven other lovely women. We talk a lot, although me not so much after the first mile and a half. Talking raises my heart rate too much and makes me huff and puff more, so I stick to short uh huh, yes, no type answers. Sometimes I'll add a sentence here and there, but it'll be like two or three words, pause, huff puff, two or three more words, pause, huff puff, and repeat until the sentence gets out. We mostly talk about fitness, fitness clothing, nutrition, healthy recipes, etc., so I'm really getting A LOT out of this class.

Next Tuesday is the last class and we're all discussing who wants to run the 5 Mile race on the Saturday after Thanksgiving. Today's 4 mile run was the most I've ever done. I'm not so sure I'm ready to tackle 5 miles in just a week's time. I'm still debating. Cue Jeopardy music. ;)

In between spin class and running class, I got the girls off to school (with husband's help driving the teen to high school), and then went to help divide the produce up for all the families in my organic co-op. I did that from 8:45 to 10:15 am and as soon as it was done, I raced to the park for run class and barely made it there with a minute to spare. Needless to say, I could go for a serious nap right now. I only have a few minutes before I have to pick up the girls from school, though, so I thought I'd share this week's share with you instead of napping. 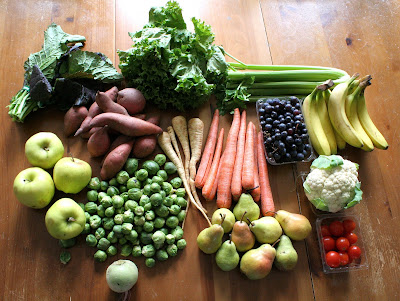 Can you guess why it's called a watermelon radish? 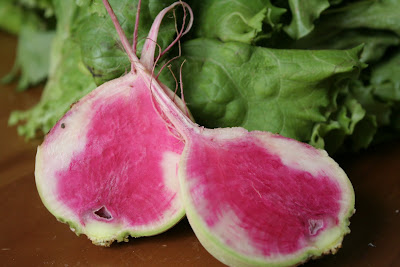 Isn't that pretty? I've had these in the past and found them to be rather mild, which I like since I'm not very keen on radishes in general. I'll just use a little here and there in salads until it's gone. ;)
Which item in my share this week looks or sounds most appealing to you?
Posted by Christine at 2:51 PM