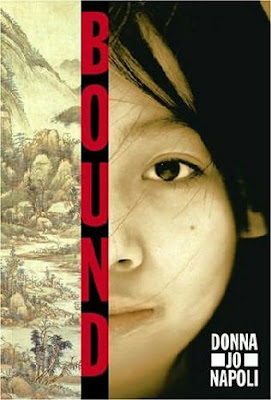 Bound is a Cinderella inspired story of a fourteen year old girl named Xing Xing living in a small village in northern China during seventeenth century Ming Dynasty with her Stepmother and half sister Wei Ping. Upon the death of Xing Xing's beloved father, Xing Xing became bound in servitude to her stepmother and half sister. She is barely treated better than a slave by Stepmother who not only insults and demeans Xing Xing, but also demands that Xing Xing perform all of the daily chores required to care for her and her daughter and their humble home. Xing Xing clings to the values taught to her by her mother and father, and also secretly practices the "three perfections" taught to her by her father--poetry, painting, and calligraphy. She finds solace in these arts, and in a beautiful carp that she befriends, if you will, in the spring from which she retrieves their daily water. Xing Xing treasures the carp more than anything, as she comes to believe the carp is the soul of her mother reincarnated.

Determined to find a suitable husband for Wei Ping, Stepmother acts against her late husband's wishes and begins the painful process of binding Wei Ping's feet in hopes that by making her feet smaller, she would be better fit as a man's wife. The process of binding girls' feet is always painful and dangerous, but is usually started when a girl is very young and still growing. As a young teen, Wei Ping is already full grown and having her feet bound now causes not only extreme pain, but also severe infection. Wei Ping's life threatening infection then becomes the catalyst for a series of dramatic events that could either ruin Xing Xing's future forever or grant her the freedom she's always longed for. The freedom to think and act for herself, unbound from servitude and unbound from the strict social expectations of a woman.

Bound is a stark, realistic retelling of the commonly known Cinderella type fairy tale. The setting of the story in ancient China, along with the historically accurate traditions of ancient Chinese culture help make this story incredibly realistic and offer the reader a stark look into the unfair expectations and treatment of women within the society. While the hardships faced by women during that time seem unjust and demeaning to the modern reader, the author was able to convey normalcy of those hardships during that particular time period for that culture.

In the traditional Western version of Cinderella, the stepmother and stepsisters are wicked, selfish, and ill-intentioned. Yet in Bound, the stepmother's actions are actually understandable and somewhat justified based on the norms of the ancient Chinese culture. This allows the reader to empathize with Stepmother to a certain degree, making the conflicts of the story not entirely black and white, which in turn gives this story more depth and complexity than the typical Cinderella story. No doubt, Stepmother does inevitably act in poor character, but she is driven by the need to literally survive and will stop at nothing to secure Wei Ping's and her own future by finding Wei Ping a husband. It truly is a matter of life or death for her and her daughter, and sadly, there is no obligation to secure Xing Xing's future or even to preserve her life.

Xing Xing is a lovely character. She is lonely and mourns the loss of her mother and father, both of whom she loved dearly and with whom she shared close relationships, yet despite this sorrow, Xing Xing is an optimistic young girl who through constant reflection of all her parents taught her, manages to maintain a love of life and a hope for a better future. Xing Xing is also insightful and clever, and learns when and where she should expose her skills in the arts where it can work to her advantage. Xing Xing is also empathetic and caring, especially towards Wei Ping and she does what she can to care for her and keep her spirits up. She is even gracious to Stepmother--at least until Stepmother betrays her in the worst way. Upon learning of Stepmother's betrayal, Xing Xing reflects on the following philosophy taught to her by her father. It is one of my favorite passages from Bound:

Learning is not the accumulation of knowledge, but rather, one thing only: understanding. To truly learn, you listened first with you ears, then with your heart, then with your qi.

Note: In traditional Chinese culture, every living thing possesses a qi. While its meaning is varied, it is largely thought of as the "flow of energy" that sustains a living thing.

I thoroughly enjoyed reading this story and found it to be a very unique and powerful rendition of the classic tale. At the end of the story, however, I wished it wasn't a retelling of the classic Cinderella, because I felt the lost slipper and Prince ending to be a bit anticlimactic. Through self reflection and self confidence bestowed upon her from her mother and father, Xing Xing grew from a child to an independent, brave young woman, and I wanted her to acquire her freedom being bound on her own, without the help of a Prince. While I understand that the story is bound by the constraints of the classic tale as well as by the realism of a woman's power in this time period, I felt the ending was rather incongruous with the rest of the story. However, it is still a wonderful, thought provoking story that shouldn't be missed.
Bound is a beautifully and poetically written retelling of the classic, familiar fairy tale-- a coming of age story that is enlightening and hopeful.
GRADE: B+
Posted by Christine at 12:21 PM