Nalini Singh's ANGELS' BLOOD: As good as the hype? 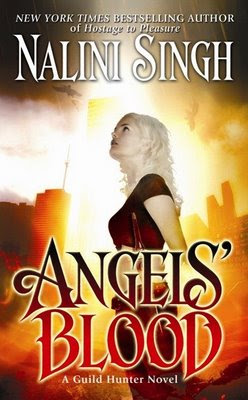 Have you ever been highly anticipating a new release by one of your favorite authors, but when you start hearing some really awesome buzz on the internet from readers who have read it already, that buzz makes you nervous? Nervous because the buzz is so good--like raving, gushing good-- that your expectations on the book just go out of the roof, sky high.

Now you wonder how the book could possibly be as good as the hype.

Well, that's happened to me before, and just very recently with the anticipation of Nalini Singh's upcoming release Angels' Blood, the first in her new Guild Hunters series.

So far, everyone who has read Angels' Blood loves it:

Brie at Musings of a Bibliophile gives Angels' Blood an A-.

Katiebabs at Katiebabs Babbles a B+.

Kmont at Lurv a la Mode gives it a rating of, and I quote, "Five Scoops, absolutely one hundred percent pure excellence." I'm pretty sure there isn't a grade higher than that!

And while the official verdict isn't out yet from Ana and Thea at The Book Smugglers, I did catch on Twitter that Ana is loving it as well.

So you wonder.... is Angels' Blood as good as the hype?

The answer is YES!

I started reading Angels' Blood last night and it is amazing. I am completely absorbed in this book and absolutely love it so far. All the hype is true! Honestly, I'm only on page 133, but so far, it is really fantastic. The characters, the series premise, the conflict, the WORLD. Brilliant. Just brilliant. You're going to love it!

Oh, and by the way, don't mad or jealous that I'm reading an ARC of Angels' Blood. Because honestly? I'm probably going to finish the book in a day or two and it will be over. Then I'll be jealous of you that you've got the brand new, exciting, spine tingling experience ahead of you when the book hits the shelves. It's true.

Angels' Pawn is an advanced peek into the series via a special ebook novella that releases on February 24, 2009.
Angels' Blood is the first book in the Guild Hunters series by Nalini Singh and releases on March 3, 2009.
Visit Nalini Singh's blog here for more information and some great contest opportunities!
You can also learn more about the author and her published works at http://www.nalinisingh.com