Win a copy of HUNGER GAMES by Suzanne Collins

Hunger Games by Suzanne Collins is a young adult novel to be released on September 14, 2008. 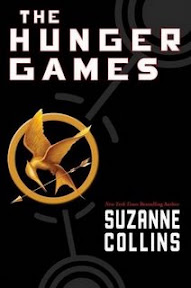 Katniss is a 16-year-old girl living with her mother and younger sister in the poorest district of Panem, the remains of what used be the United States. Long ago the districts waged war on the Capitol and were defeated. As part of the surrender terms, each district agreed to send one boy and one girl to appear in an annual televised event called, "The Hunger Games." The terrain, rules, and level of audience participation may change but one thing is constant: kill or be killed. When her sister is chosen by lottery, Katniss steps up to go in her place.

Writer and avid reader and reviewer of Children's, Young Adult and Teen literature, Cheryl Rainfield is giving away three copies of Hunger Games on her blog. To enter the drawing, leave a comment on Cheryl's book blog on the contest post here. If you mention the contest on your blog, you earn yourself a second entry. Check out Cheryl's review of Hunger Games here.

Thank you to Angie at Angieville book blog for the heads up on this contest and the glowing review by Jia on Dear Author that I read earlier today that sold me on wanting to read Hunger Games in the first place!
You can also read the Entertainment Weekly review of Hunger Games written by Stephen King here.
Posted by Christine at 1:19 AM