The theme for March's TBR Challenge, hosted by Wendy the Super Librarian, is 'Series Catch-up.' To say I had numerous series to chose from would be a serious understatement. I would wager that most of the books on my TBR pile are part of series. However, since I read The Raven Prince by Elizabeth Hoyt for last month's challenge and it is the first book in The Princes Trilogy, I thought it would be productive of me to just keep going and read the second book--The Leopard Prince, this month, which I did. I enjoyed it even more than The Raven Prince! Needless to say, I'm enjoying this trilogy and plan to read the third and final book, The Serpent Prince, shortly. I even gave myself a sneak peek by reading the first chapter last week.

I included images of two different versions of the cover art for The Leopard Prince in this post. Usually I just use the cover art for the version I own, which is the first one shown below--the original art work, but in the case of this book, I wanted to also share the newer version of the book cover because the models on that book cover look exactly how I pictured them--a rare occurrence, that!

The Leopard Prince features Harry Pye --a close friend of Edward de Raaf, Earl of Swartingtham whom readers met in The Raven Prince [see my review HERE]. In The Leopard Prince, Harry Pye has been hired as the land steward to the wealthy Lady Georgina Maitland who inherited a vast estate in Yorkshire from her late Aunt. It is extremely unusual for a woman to own land and property like Lady Georgina does, and honestly she knows very little about managing an estate. She is conscientious nonetheless and visits the estate to investigate rumors that someone from her land has been poisoning sheep on the nearby lands owned by the vile Lord Granville. No one in Yorkshire likes this man - not even his own servants and barely his own family. Quite simply, the guy's a major asshole.

Lord Granville is Harry Pye's sworn enemy since he was a child. His father was gamekeeper for Lord Granville, who at one point had had both him and his father horsewhipped and sent to the poorhouses of London. It's no coincidence that Harry pursued the position of land steward to the Maitland properties just to be nearby to irritate Granville as much as he could. Ultimately, because of this deep seeded animosity between Pye and Granville, Pye is the most likely suspect for the sheep poisonings. Nearly everyone thinks it's Harry behind the trouble, except for Lady Maitland.

Lady Georgina is talkative, confident and has a really fun sense of humor. It takes a few meetings for Harry to realize Georgina is not just a shallow, wealthy woman interested only in jewels, gowns and balls, but is genuinely concerned for the people and land in her estates. He starts to really see the intelligent, confident and beautiful woman she really is and in turn, Georgina discovers the knowledgeable, caring man Harry is--one with the confidence and strength to do what's right by the land and its people. It's no wonder these two fall in love as they spend time together investigating the sheep killings.

I loved this trope of the Lady and her servant falling in love. For me, it was great fun to read a sort of role reversal of the prince falling in love with the poor village girl. It worked really well, too, because while Harry may not be born into nobility, he's by all means of noble character. Except, perhaps, when he has Lady Georgina in his arms. Actually, that's not entirely true. He's still rather noble in that he never takes advantage of her and he makes sure Lady Georgina knows exactly what she's getting into when she starts an affair with him and that she truly wants it. The inner conflicts Harry and Georgina struggle with in order to do best for the other were realistic and I appreciated the pace at which the conflicts arose and were resolved--not to rushed and not drawn out, and kept interesting and exciting right to the very end. In fact, to say the story ended with a bang would be quite accurate.

I adored The Leopard Prince and look forward to reading the final book in the trilogy, The Serpent Prince, which features Lord Simon Iddesleigh, close friend of Edward de Raaf and Harry Pye.

4.5 out of 5 stars on goodreads. If one could give half stars, that is.

Next month's TBR Challenge theme is 'New-to-you Author.' In other words, a book from your TBR by an author whom you have not yet read. 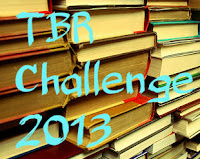 Posted by Christine at 2:38 PM