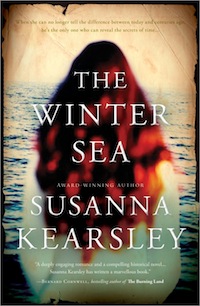 I finally finished reading The Winter Sea the other day and am so excited to post this book discussion for the group read. My apologies for taking so long to read this book. It took me three weeks to read, but rest assured it was not a result of lack of interest, but a mere shortage of reading time that kept me from devouring it. If it wasn't for feeling guilty for holding up the book discussion, I would say that I'm rather glad it took me a while to finish this book, because it is one worth savoring. The Winter Sea is a well written, well paced, interesting work of fiction and wonderfully laced with romance.

The Winter Sea is often referred to as time travel historical fiction, but I consider it more of a clever blend of contemporary and historical fiction in one story. The story is told from two alternating perspectives. One is the first person point of view of Carrie McClelland, a successful Canadian writer of historical fiction who is writing a novel surrounding the events leading up to the Jacobite Rebellion in Scotland in 1708 as the exiled James Stewart seeks to reclaim his crown. While visiting her agent and friend in Scotland, the ruins of Slains Castle call to Carrie and she fells compelled to rent a cottage in the area so that she can properly research and write her book. She rents a cottage from a local man, Jimmy Keith and befriends his two sons Stuart and Graham, falling romantically for the latter.

The other perspective is told from the third person, following a young woman named Sophia Paterson who arrives at Slains Castle in the early 1700s to stay with a distant relation, the Countess of Erroll and takes place over a couple of years surrounding the events of the Jacobite Rebellion in 1708. It is at Slains Castle where Sophia learns of the stirrings of a rebellion on behalf of James Stewart --James VIII of Scotland and III of England, to reclaim his crown. This is also where she meets and falls in love with Mr. John Moray, a man trusted by Queen Mary herself (the birth mother of James Stewart) closely embroiled in the rebellion. Their story is a heartbreaking one full of danger and secrecy, but also one of hope and survival.

Since the purpose of this post is to lead a group discussion of The Winter Sea by Susanna Kearsley, I am going to assume that everyone reading this has already read the book. If you have not read the book, be warned that there are spoilers in the remainder of this post as well as in the comments. If being spoiled is not you're thing, I suggest you click away and come back after you've read The Winter Sea. I hope you do, as it is worth reading.

WARNING: SPOILERS AHEAD! Read at your own risk.

The main character of The Winter Sea, Carrie McClelland, is a writer of historical fiction. Throughout the book, it is as though we are looking over her shoulder witnessing how she conducts research, finds inspiration and writes as much as she could whenever her muse strikes. I loved this glimpse into the life of a writer and found it realistic and informative. Did you enjoy this aspect of the story as well? Any thoughts?

Many readers categorize The Winter Sea as time travel fiction. I'd rather say it is a clever and sophisticated meld of contemporary and historical fiction in one cohesive story. Kearsley uses the concept of genetic memory -- Carrie's ability to share some of the memories of her ancestors, to weave these two story lines together. Did the concept of genetic memory work for you in this story?

Kearsley's writing is beautiful -- richly descriptive without being the least bit excessive. The quality of the writing and even Kearsley's choice of words themselves, kept me captivated. Do you know someone who is so good at telling stories that their mere voice can lull you in and you feel as though you could listen to them talk about anything--even a trip to the grocery story or filing their taxes and you are fully absorbed in their story telling? That's what reading Kearsley's work is like. It flows so richly and naturally in your head that you just want it to go on and on. What is your opinion on Kearsley's story-telling voice?

There are many beautiful passages and memorable quotes in The Winter Sea. The following are among my favorites:


'Aye,' he said, 'there is no sight so melancholy as the winter sea, for it does tell us we are truly at the ending of the year, and all its days are passed, its days of joy and sorrow that will never come again.'

Then a bit farther down the page, again spoken by Colonel Graeme to Sophia...


'For if there was no winter, we could never hope for spring.'

And later in the book among pages where my heart broke the most.. [p.451 ebook]


How did you tell a child who did not know you were her mother that you loved her, and that leaving her was all at once the bravest and the worst thing you had done in all your life, and that you'd miss her more than she would ever know?


[...] as surely as the wind and waves would shift the sands till next year's coastline bore no imprint of the one the year before, so too the passing days would reshape Anna's mind until Sophia was but forgotten.

Do you have any favorite quotes or passages from The Winter Sea?

Reading The Winter Sea is as much a historical lesson as it is a fictional novel. I am impressed by and appreciate the author's accurate (or very close to) portrayal of real-life historical persons in her story and her ability to weave a dramatic love story with the addition of a few fictitious characters used for romantic purposes. Who is to say that this love affair or something nearly similar didn't occur during this time.

However, the only thing that kept me from giving The Winter Sea a perfect rating is the elaborate cast of historical characters that I had such trouble keeping straight. I realize these characters were all necessary for this story--and most of them real people involved in the rebellion at the time, and I wouldn't have wanted the author to leave out a single person or detail, but unfortunately, I simply never felt confident of who was on the side of the Jacobites and who was loyal to Queen Anne. Then, if and when someone betrayed the cause, it took me a bit of time and sometimes back tracking in the story, to realize that's what happened because I forgot whose side they were on! Oye. Needless to say, it is my only complaint and likely my own shortcoming as I haven't read of anyone else struggling with this. Regarding the names, places and allegiances to the crown(s)-- did you get confused? Did it ever pull you out of the story as you were reading?

If there's anything else you'd like to add to the discussion, please do!

Thank you for participating in the group read of The Winter Sea by Susanna Kearsley. I hoped you enjoyed the book as much as I did. Don't forget that Kearsley's latest (next) novel, The Firebird, is a companion book to The Winter Sea and is another contemporary - historical blended story that tells the story of John Moray and Sophia's daughter, Anna. I'm so excited to read it! What about you?

Read more about The Firebird on the author's website HERE.

Also, be sure to check out these links:
Hilcia's Review of The Winter Sea

If you have a review or post about The Winter Sea on your blog, let me know and I'll add it to the list.
Posted by Christine at 2:49 PM