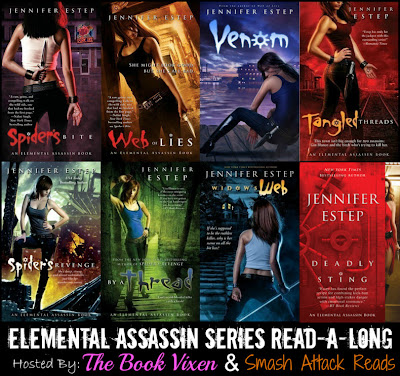 The Book Vixen and Smash Attack Reads are hosting a Read Along of The Elemental Assassin series by Jennifer Estep. This urban fantasy series features a kick ass female assassin named Gin Blanco known by her street name "The Spider." I have been wanting to read this series for ages. Just ask nath. She loves this series and every time she posts a review of the next book, all my comments are the same--'I want/need/must read this series!' So I'm  finally going to do it. Thanks to a big ole kick in the butt from The Book Vixen and Smash Attack Reads. What better motivation than to have deadlines and cool book people with whom to chat about the books, right? So if you've always wanted to read this series or if you're simply curious, why not grab the first book and see what you think? I may only be 70something pages in the first book, but already Gin has got my attention and I'm feeling the intensity of this character and her world.

There are currently seven full length novels and several novellas out already. For the read along, we're going to read one novel per month starting with Spider's Bite this month and ending with Deadly Sting [ the 8th book which will be released March 26, 2013] in April.

Visit the announcement post HERE for more information about the read along including links to the books on amazon.

Do you read the Elemental Assassin Series by Jennifer Estep?

What are your overall impressions of the series?

Which book is your favorite so far?

PLEASE NO SPOILERS IN THE COMMENTS. I'm allergic. ;)
Posted by Christine at 10:29 PM