Here is my latest library loot. This is from two different visits to two different local libraries--my town library and the library from the next town over which is actually closer to my house! Oh, plus a new release from the latter mentioned library that I asked my friend to get me because they don't allow out of town residents to borrow their new releases. And books are considered new releases for a whole year! Kills me. Thank goodness I have a few friends in that town who don't mind getting on the hold lists for me. ; ) 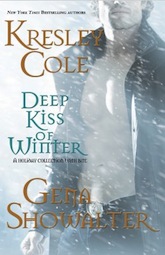 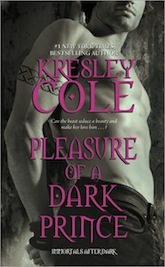 I've been on a roll re-reading and catching up with Kresley Cole's Immortals After Dark (IAD) series, filling in the gaps of the books I don't already own with trips to the library. Omg this series is like candy! You stick your hand in the jar and you just want more, more, more! You can't stop eating. It's such a fun series. It's FUNNY and fun and lovable and adventurous and the characters go through hell for each other and their loved ones and get so torn up over their promises, their allegiances and their desires. It's oodles of alpha fun mixed with some seriously kick ass modern women who know what they want, or at least have a wild time figuring it all out. Anyway, I read Deep Kiss of Winter last week. LOVED the IAD story of Daniela the half Valkyrie and half Ice Fey Maiden and the vampire Murdoch Wroth. I wasn't crazy about the Gena Showalter short which is from her Alien Huntress series. The characters fell kinda flat for me and it just seemed everyone's motives were all just based on sex and instant desire without a whole heck of a lot of emotion. You can read my review of this book on goodreads HERE.

Next up is Pleasure of A Dark Prince, book NINE (!) in the IAD series. This one is the story of the Valkyrie named Lucia the Huntress [the Archer]--and Garreth MacRieve, Prince of the Lykae [werewolves]. This story is taking place around the same time as the other stories in this series, so in the beginning, Garreth doesn't yet know that his brother and the true King of the Lykae, Lachlain MacRieve still lives and is in fact in hot pursuit of his mate, the darling and timid half vampire, half Valkyrie Emma. That's book two. Anyway, I've already over a hundred pages into this story and really enjoying it. I like Lucia a lot and love the way Garreth is just over the moon for her. They're pretty darned adorable. I put it down, though, to read my September TBR Challenge book which I ended up not finishing in time anyway. Can't wait to get back to Pleasure of A Dark Prince soon! 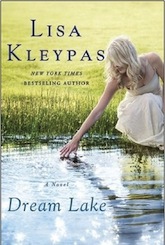 Dream Lake by Lisa Kleypas
This is third book in Ms. Kleypas' latest contemporary romance / chick lit Friday Harbor series. I'm looking forward to reading this one. The main character, Sam Nolan has some serious problems that will require a woman with patient and generous heart.

I haven't borrowed graphic novels in a while, so I browsed the shelves hoping to find some that might be fitting for the RIP VII reading event going on now. Here's what I brought home: 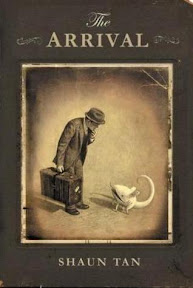 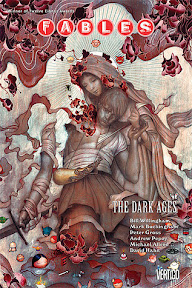 The Arrival by Shaun Tan.
Critically acclaimed, this one.

Fables: The Dark Ages
by Bill Willingham, Mark Buckingham, Peter Gross, Andrew Pepoy,
Michael Allred and David Hahn.
Winner of Twelve Eisner Awards! Saw this one on Marg's blog and I know Kelly reads them, too, so when I saw this one at the library, I grabbed it. I couldn't tell which book it is in the series, but it was the only one of the series my library had. Turns out it's the 12th one! Ho hum. Think I might like to hunt this series down and start with the 1st book. 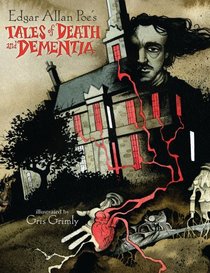 Edgar Allen Poe's Tales of Death and Dementia
by Edgar Allen Poe, Illustrated by Gris Grimly
This is a re-loot. Borrowed it earlier this year and never got around to reading it. Thought it would be a great RIP book. It's actually a picture book for teens! I hope to review it and maybe post some images of the illustrations and text inside.

You just KNOW I had to go check out the new cookbook shelf, too. I do that every visit. Here's what I'm reading in cookbooks right now: 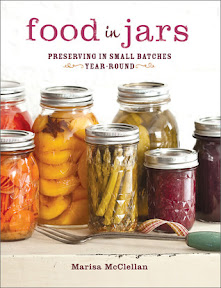 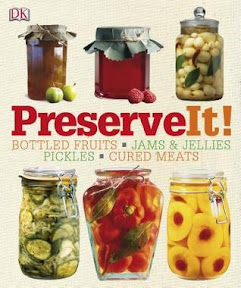 Food in Jars: Preserving in Small Batches Year-Round
by Marisa McClellan.
Written by a popular food blogger. So many food bloggers are writing their own cookbooks these days. Such an awesome opportunity for the home cook. Really fantastic. Anyway, if you visit my blog regularly, you know I love making food from scratch, including jams and more recently canned tomatoes. Looking forward to finding some inspiration and recipes to try with this one.

Preserve It! by Lynda Brown
This cook was right next to Food in Jars, so I thought it would be a nice complement to my cookbook reading this week.

What are you reading from your library right now?

What was the last cookbook you bought or borrowed from the library?

Posted by Christine at 4:56 PM