REVIEW: Hearts of Fire: A Deadglass novella by Kira Brady 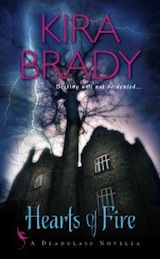 Hearts of Fire is a prequel novella to the upcoming paranormal Deadglass trilogy by debut author Kira Brady. In this Romeo and Juliet inspired story, readers are introduced to a unique world of shifters living in an alternate, gritty city of Seattle, unbeknownst to humans. The year is 1889 and the Kivati clan of animal shifters has long established Seattle territory as their own, protecting humans from the threat of the nearby Gate to the Land of the Dead. Now the dangerous and soulless dragon-shifting Drekar clan arrives in the city, threatening to disrupt the relative peace.

Alice Corbette is the young heiress of the Kivati clan and notices a handsome, enigmatic man--Brand Haldor, in the streets of Seattle. As soon as she catches his eye, he, too, is drawn to her. The attraction between Alice and Brand is undeniable, as if destiny has brought them together. It turns out Brand has arrived in Seattle on a debt to Sven Norgard, the leader of the Drekar Clan, sworn enemies of the Kivati. The love between Alice and Brand is doomed--torn between loyalty to their clans and true love. Is their love the key to peace between the clans?

If Hearts of Fire accomplishes one thing, it's that it gives the reader a solid background to the two warring clans, the Kivati and the Drekar. We learn a bit about each of their histories and inherent traits, why they are at odds with each other and how determined they both are to be in control of the Gate in Seattle. As for the romance, it's very quick, if not too quick. The romance does have a fairy-tale quality to it with dual love at first sight and star crossed lovers thing going on, but would have been stronger if we were more convinced that Alice and Brand were meant to be together. All is not lost, though, since the romance helps set up the world building of the Deadglass trilogy, which is unique and very intriguing and the writing is very sharp.

Hearts of Darkness, Book One of the Deadglass trilogy comes out early August 2012. It takes place in modern day Seattle and the tension between the Kivati and Drekar clans still runs high. The story is smart, gritty and very tense! I know because I'm reading it right now.


Note: I purchased the Hearts of Fire novella with my own money and have reviewed it without compensation of any form from the author, publisher or bookseller.
Posted by Christine at 1:03 AM