This is my July TBR Challenge review [hosted by Wendy the SuperLibrarian] and I can't believe I made it on time this month. I was happily engrossed in a cute book as of Monday when I realized this week was TBR week, so I quickly shifted gears and picked up this book for the challenge. This month's suggested theme was, "How did this book get here?" [in your TBR pile]. I'm pretty sure this book was passed to me years ago in a generous box full of books from one of my beloved book fairies, Kate. 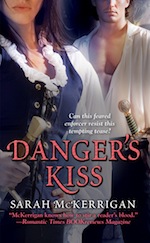 Set in 13th century England, Danger's Kiss is a medieval romance between a trained thief named Desirée and the village lawman, Nicholas Grimshaw. Years ago, Desirée was sold by her desperate parents to an elderly, experienced thief named Hubert Kabayn who mentored her in the fine art of trickery and used her as an accomplice in his daily thievery. She's a quick witted and lively beautiful young woman. Nicholas Grimshaw is the most feared lawman in the shire, known for his satchel of torture instruments that he uses to extract confessions from criminals and the ruthlessness with which he carries out punishments. He has become a grim, serious and lonely man.

When Hubert is executed for a murder he didn't commit, Desirée becomes determined to clear his name. Her plans to avenge Hubert's wrongful execution get delayed, however, when Nicholas honors the promise he made to Hubert just before his execution to care for Desirée. In order to keep Desirée off the streets, Nicholas hires her as his maidservant in his cottage in the outskirts of town. She tries to make trouble where she can so that Nicholas will want to release her but she soon finds she likes earning an honest wage and living a simple life in Nicholas' cottage. In fact, they both find happiness in each other's company that they've never before felt.

Desirée continues to try to clear Hubert's name and determine the true identity of the murderer. In the process, she gets into some serious trouble that even the powerful and feared Nicholas Grimshaw may not be able to fix.

Danger's Kiss is a pleasant read with a fun storyline, but lacks the depth and emotional punch that would make it a notable read. The romance is sweet and I liked the way Desirée and Nicholas were forced together due to Nicholas' promise to Hubert and that their affection for each other grew naturally. They complemented each other well and it was obvious they enjoyed each other's company. The passion that developed between them was also very natural and consequently the romance believable. Still, the romance could have benefited from a stronger, more passionate bond or revelation of love between them.

Similarly, I felt the conflict in the story outside the romance was a bit weak and under developed. The villain is pretty lame--a wealthy Lady in the shire conspiring to gain an inheritance. Her elaborate schemes just to acquire wealth she practically already had access to just didn't make sense.

The hours I spent reading Danger's Kiss were pleasant enough. I liked Desirée and Nicholas and think they're a good match. I just wish there was simply more to both the romance and conflict. 3 out of 5 stars on goodreads.