This is my June TBR Challenge review, which was due last Wednesday. I lost track of time a bit this month and was still in the middle of reading my pick when TBR Day rolled around. At least I followed through, finished and reviewed the book.

The theme for this month's TBR Challenge was to read a western from your TBR pile. I had all of two western romances on my TBR pile.. Never Love a Lawman by Jo Goodman and Caine's Reckoning by Sarah McCarty. I chose Caine's Reckoning because I remember reading so many rave reviews for this one when it first came out, which is how it found its way to my TBR pile in the first place.

This TBR Challenge is hosted by Wendy the SuperLibrarian. To learn more about the challenge and visit the links to other TBR reviews this month search the hash tag #tbrchallenge on twitter. 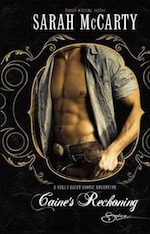 Caine's Reckoning is the first book in the western historical romance series, Hell's Eight. The series follows eight men who have banded together after having suffered terrible atrocities and losses as young adults. Now Texas Rangers, the men are their own family now and together and raise horses on their territory known as Hell's Eight. Each book in the series tells the story of one the men as he finds love and a happy ending.

Caine's Reckoning takes place in Texas in 1858--a harsh time in western history when tensions were high between white men and Native Americans and each often befell horrific atrocities at the other's hands. It was also a dangerous time for women, in general, especially if she didn't have a man to protect her. This story begins with Caine and two of his men coming to the rescue of women who were kidnapped from their families. One of the women is fighting with all her might against her captors and her ferocity catches Caine's attention. When the men return the women to town, it becomes obvious that this fierce young woman, Desi, has been essentially kept against her will by her apparent guardian. In an effort to protect her, Caine marries Desi and takes her to Hell's Eight territory where she can heal and perhaps find peace living on the ranch.

Desi is a beautiful, fragile looking woman but a courageous survivor of abuse and rape, with a fierce desire to live free. She has survived terrible atrocities in the last year, including the deaths of her parents and brother and the separation from her twin sister Ari. Desi's story is revealed slowly throughout the book as she begins to open up and trust Caine. She is challenged in many ways and grows tremendously while under his protection. She learns the truth about tender, caring relations between a man and a woman in a consensual relationship and her sense of self worth is rebuilt. In the meantime, Desi's evil and abusive guardian makes several attempts to get her back, placing her life and the lives of Hell's Eight on the line, which adds to the intensity and sense of adventure of the story.

I enjoyed reading Caine's Reckoning very much. The plot is intense and gritty and Desi is an admirable heroine. She suffered so much in the last year of her life before she was rescued by Caine and I wanted first and foremost for her to find the safe, loving environment that she needed to heal and find peace and acceptance. I finished the story knowing she was going to be more than just okay, but very deeply and well loved. She deserves nothing less.

From the very first page, I knew Caine and all of the men of Hell's Eight were the type of men who would protect Desi or any woman who needed it at any cost. They're extremely protective and aggressive, but also have very tender sides. I sometimes felt, however that Caine was a bit too aggressive with Desi. The sex in this book is more erotic than in most mainstream romances, which is fine and what I was expecting, but some of the scenes just seemed like too much too soon given the circumstances of Desi's past. Never did I think Caine wanted to hurt or traumatize Desi further and in fact, his desire to protect her was very sincere and prominent. Yet there were several instances when I felt he was not respectful enough of her need for space and to take things slowly. He eventually figured it out, though, and let things progress at Desi's pace, but still, I found it hard to believe that after just a few weeks under Caine's protections and affections that she would have been so receptive to some of the eroticism he was introducing in their bed.

Wishing we could award half star ratings on goodreads, I give Caine's Reckoning 3.5 out of 5 stars.