Around this time last year, I wrote a Library Loot & BEA story post about how I went into the city one evening during the Book Expo of America (BEA) to meet book blogging friend Michelle [Red Headed Book Child] for dinner. While I was walking to the Javits Center from Penn Station one day in June 2011, I unexpectedly bummed into the marvelous dynamic duo Ana and Thea of The Book Smugglers on the streets of New York [We had met online in 2008 and in person in 2010]. Granted they were attending BEA but still ... what are the odds of being on the same street, the same side of the street at the same time, right?

This year I went into the city on Tuesday evening to meet up with some wonderful book blogging friends who were attending BEA 2012. While I was walking to the Javits Center, I thought it be funny if I bumped into Ana and Thea on the sidewalk again. But really... what are the odds of that? Well. I was about to cross 11th Avenue at 34th and you're not going to believe it, but I bumped into Thea! Wow. Two years in a row. Can that even be called a coincidence?!!!

In the Javits Center I met up with Kristen [fantasybookcafe.com] and Janice [Janicu's Book Blog] and then was joined by Kate [Babbling about Books and More] and Ana [The Book Smugglers] all of whom I've met before. I also met with Leanna Renee Hieber, author and friend of Kate, and for the first time, I met Jessica [Read React Review], who I admire very much. After hanging out for a while over a snack and some iced coffee, Kristen and Janice left for a sci/fi event at the New York Public Library, Ana left to met Thea for a party, and Kate, Leanna, Jessica and I went out to dinner and chatted some more. Of course we chatted about the expo and books and a whole bunch of other stuff. Such a nice evening and I was home just after 9:30pm! Example #16 why I love where I live. :) 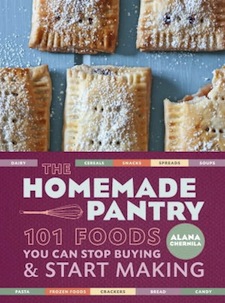 Here's a look at my latest library loot.

First is a recently released cookbook that I borrowed as soon as it came in, The Homemade Pantry by Alana Chernila. I had to return it already because it's only a 14 day book and there is a hold list for it, but I did jot down a frew recipes and I'm either going to borrow it again or just buy it for myself! I love this book!


Yesterday I came home with this pile of books:

from left to right:


DK Eyewitness Travel Guides for London and Scotland.
I also looked for one for Iceland at two of my local libraries and didn't find one. Can you guess where we're going on vacation this summer? So excited!!!

V For Vendetta by Alan Moore and David Lloyd
Graphic novel.
This one consistently pops up on the top of goodreads Listopia lists for the best graphic novels, so I thought I'd check it out. I have not seen the movie either so I'm very curious.

A Midsummer Night's Dream by William Shakespeare
This version is published by HarperTeen imprint of Harper Collins Publishing and comes across as an appealing way to introduce Shakespeare to teen readers who perhaps shy away from the classics or books that are considered "stuffy." It has some Extra sections--including a love quiz at the end. Pretty cute. I'm reading this for my Once Upon a Time challenge.

Bean by Bean: a cookbook by Crescent Dragonwagon.
I saw this cookbook reviewed by Beth Fish Reads for Weekend Cooking months ago, and she really liked it. I already flipped through it and found some great information on cooking with beans and many delicious sounding recipes. Soups, stews, salads and even sweets from many diverse ethnic cuisines. I want to try so many of them!

It just so happened that the library was having another used book sale and I showed immense restraint and only came home with three books!

Blood and Gold by Anne Rice.
A few years ago I bought nearly the entire set of Vampire Chronicles books at the used book sale for maybe $5. My friend Mariana gave me a few that I didn't have a year or so after that and now I found one more! When I first started reading romance, I devoured a lot of paranormal vampire romance and thought this would be a neat collection to have, even though I know it's not romance. I don't know if I'll ever read them, but I like having them on my bookshelf.

The Edinburgh Dead by Brian Ruckley
This book caught my eye because of the title. Since we will be visiting Edinburgh on vacation this summer, I thought why not read this book that takes place there before I go! It will be perfect for the Book Pilgrimage Challenge I am participating in. The one I didn't tell you about yet! Oops.

His At Night by Sherry Thomas
When I asked Jessica on Tuesday night who some of her favorite authors are, historical romance writer Sherry Thomas was one she mentioned. While I do have one or two of Thomas' books on my TBR pile somewhere, I still haven't read any of her works. So when the yellow-gold cover of His At Night jumped out at me at the used book sale yesterday, I took it as a sign and snatched it up!

What books do you have out from the library right now?

Library Loot is a weekly event co-hosted by Claire from The Captive Reader and Marg from The Adventures of an Intrepid Reader that encourages bloggers to share the books they’ve checked out from the library. If you’d like to participate, just write up your post-feel free to steal the button-and link it using the Mr. Linky any time during the week. And of course check out what other participants are getting from their libraries! This week's Library Loot is at ???.
Posted by Christine at 4:30 PM