Library Loot is a weekly event co-hosted by Claire from The Captive Reader and Marg from The Adventures of an Intrepid Reader that encourages bloggers to share the books they’ve checked out from the library. If you’d like to participate, just write up your post-feel free to steal the button-and link it using the Mr. Linky any time during the week. And of course check out what other participants are getting from their libraries! This week's Library Loot is at ???. 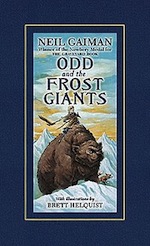 Odd and the Frost Giants by Neil Gaiman
I'm reading Neverwhere by Neil Gaiman right now and really enjoying it--both the storyline and Gaiman's style, so when his novella Odd and the Frost Giants popped up under a search for books of Norse mythology, I decided to give it a go. Of course, it helped that my library had it on the shelf. Odd and the Frost Giants will likely be my mythology book for the Once Upon A Time VI reading challenge, although if time permits, I may seek out another one. Especially since this one is a middle-grade book. I don't know very much about Norse mythology, so I'm curious. I only know very, very little. Basically what was mentioned in the recent Avengers movie. :P 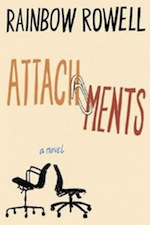 Attachments by Rainbow Rowell
I am reading this one on the recommendation of nath and then Leslie, ames and Brie. I saw it in the new release section at my library several weeks ago, but have such a long queue of books I want to read right now so I decided to wait on it. But then I saw it again today and noticed it has this red sticker on the binding with B & T on it. I finally asked the librarian what that means and learned that books that have that sticker are only in my library's catalog for a specific period of time before it is sent to another library. So I decided I'd better borrow this one while it was still available! So Attachments is about two women who are officemates and exchange personal emails throughout the day, chatting and gossiping and a man who is hired for internet security to monitor emails within the company. He starts falling for one of the women based on her emails. Sounds like a fun read!

B & T stands for Baker & Taylor and I think they're kind of like a library that lends books to libraries (or other organizations) for fees that would be smaller than it would be for my library to buy those books. Anyone else know more about it?

Of course I had to check out some new cookbooks while I was there. 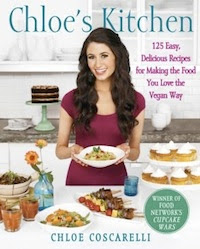 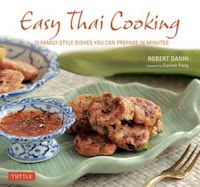 Chole's Kitchen by Chloe Coscarelli
A vegan cookbook by Chole Coscarelli, winner of Food Network's Cupcake Wars. Lots of variety in this cookbook with easy to find ingredients that many home cooks already have on hand.

Easy Thai Cooking by Robert Danhi
We just love Thai food in my house. I quickly thumbed through this cookbook at the library and saw several recipes that I might try. Best for cooks who have access to an Asian market as many of the ingredients--especially the spices--are Asian-specific. Some large supermarkets these days have well stocked ethnic food aisles, too. The author also took the time to explain ingredients and basic Thai cooking methods, which is always appreciated when approaching a new cuisine on your own! 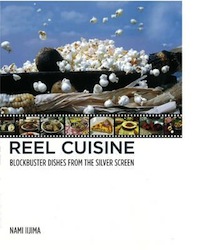 Reel Cuisine: Blockbuster Dishes From The Silver Screen
by Nami Iijma
I saw this little cookbook mentioned on someone's blog not too long ago during Weekend Cooking and thought it sounded so fun. I was excited to see it in my library's new book section. Of course I had to borrow it. It was originally published in Japan in 2009 with a translated copyright of 2011. The recipes aren't necessarily overly impressive, but the cookbook is such a cute concept and would make a great gift for the movie buff in your life who also likes to cook. There is a recipe for Crème Brûlée from one of my favorite films--the french film, Amélie. I might just have to make that one 'just because'! And if you haven't watched Amélie, I suggest you do!

What books, if any, do you have out from your library?


What are you reading?