In Death Series Reading Challenge May 2012


Interested in joining the Challenge? Anyone is welcome to join in at any time of the year at wherever in the series you currently are. See the sign up post HERE

Did you read any In Death series books this month?

CHALLENGE PARTICIPANTS:
Link up any In Death posts you made this month here. If you made a post on your blog, whether it be a review or commentary, please grab the link to your post and enter in the Mr. Linky below along with your name so we can find each other's latest In Death posts easily. You can also just use the link to your goodreads or other virtual bookshelf. 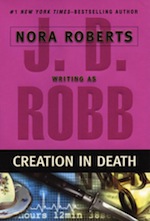 Creation in Death by J.D. Robb
In Death series, Book #25

This story opens with Lt. Eve Dallas called to the scene of a murder that's all too familiar: The body of a young brunette woman with wounds on her body indicative of horrific torture and carved in her belly is the time it took for her to die. Nine years ago, the department investigated a series of murders just like this one, the case never solved. Now this vicious, elusive murderer known as "The Groom" is back in NYC, targeting women who work for Eve's multimillionaire husband Roarke. Eve and her team are literally racing the clock with a vengeance to catch "The Groom" once and for all and before more women die.

I have to admit that it took me almost half the book before I got pulled into this one. The case was interesting enough, but there was a lot of fact gathering going on and very little criminal suspense or personal drama to the story at that point to keep me absorbed. Plus I have to admit being somewhat annoyed that once again, expert civilian Roarke is working around the clock with the NYSPD on this case and even present at meetings with the commissioner. Really?

Thankfully, around half way through the book the pace finally picked up. In fact, it got so intense that I didn't want to put it down! The reader is exposed to the murderer's disturbing torture methods throughout the story, which definitely raises the creep-factor several notches. His motives are slowly revealed as the investigation progresses, which in turn makes it all the more disturbing. Not only are the physical acts horrific, but so are the psychological aspects.

There are some great scenes between Eve and Feeney, both heated and emotional, as they rehash the investigation from nine years ago and discover that neither one of them have ever gotten over the frustration and guilt from having never solved "The Groom" murders long ago. These several scenes and the last couple of chapters turned this book from an okay read into one I thoroughly enjoyed. I even choked up a bit there at the end!

I gave Creation in Death 4 out of 5 stars on goodreads.


Broadly speaking, it seems that many of the In Death crime investigations can be categorized in one of two ways. Personal homicides or serial murders. By personal homicides I mean cases in which the  murderer kills people he or she personally knows; domestic or professional type relationships. By serial murders I mean homicides in which the murderer is selecting strangers as his victims who fit some specific criteria, usually tied to his or her past.

Do you prefer one or the other above type of crime investigation in this series?


Or do you like to read this series primarily for the personal interactions with the characters?


I don't prefer one crime investigation or the other, although I have to admit the serial murders usually end up being super creepy. The kind that make me nibble on my fingers and shudder and cringe at the horror. I do prefer, however, when the crime investigation gets entangled with the personal lives of our favorite characters, whether it be Eve, Roarke, Peabody or any one else in Eve's circle of friends. Those stories seem to be the biggest page turners for me.

Posted by Christine at 3:41 PM