REVIEW: The Girl Who Circumnavigated Fairyland in a Ship of Her Own Making by Catherynne M. Valente

If that title alone doesn't grab you, perhaps my review will... 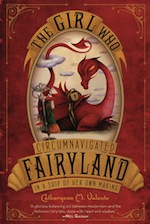 The Girl Who Circumnavigated Fairyland in a Ship of Her Own Making is a charmingly whimsical, albeit at times dark fairy tale about a precocious twelve year old girl named September who longs for excitement and happiness when her life has become less than joyful after her father has left to fight a war overseas and her mother has gone to work as an airplane mechanic. Within the first pages of this story, September is visited by the Green Wind--a gentleman in a green jacket and green jodhpurs, who invites her on an adventure into Fairyland. In Fairyland, September meets a myriad of creatures and beings and specifically befriends a Wyvern and a boy named Saturday and soon becomes embroiled in a quest to the far reaches of Fairyland. September must rely on her quick wit and growing heart to stay alive and find her way through Fairyland. With sophisticated and poetic story telling, the reader is whisked away into Fairyland right along with September where countless insights into the hazards and joys of life provide the reader with much to ponder.

Many times while reading this story, I would find myself rereading passages for no other reason than that they invoked such vivid imagery for the senses. Such as this paragraph:


"And so I may tell you that the leaves began to turn red as September and her friends rushed through the suddenly cold air on their snorting, roaring highwheels, and you might believe me. But no red you have ever seen could touch the crimson bleed of the trees in that place. No oak gone gnarled and orange with October is half as bright as the boughs that bent over September's head, dropping their hard, sweet acorns into her spinning spokes. But you must try as hard as you can. Squeeze your eyes closed, as tight as you can, and think of all your favorite autumns, crisp and perfect, all bound up together like a stack of cards. That is what it is like, the awful, wonderful brightness of Fairy colors. Try to smell the hard, pale wood sending up sharp, green smoke into the afternoon. To feel the mellow, golden sun on your skin, more gentle and cozier and more golden than even the light of your favorite reading nook at the close of the day. " [p. 130]

The Girl Who Circumnavigated Fairyland in a Ship of Her Own Making is an unforgettable fairy tale that would appeal to adults and children alike. In fact, it would make a wonderful read aloud book to be share with the child in your life. Even if you think the days of reading aloud are over in your house, capture them with this book if you can, because...

The Girl Who Circumnavigated Fairyland in a Ship of Her Own Making has a decisive conclusion and can certainly be read as a stand alone novel. However, I am compelled to tell you that never before has one short sentence near the end of a book made me gasp in bittersweet delight that a sequel would be on the horizon for September and her friends. Said sequel to this unforgettable and enchanted book is expected to be published in March 2012, and will be titled The Girl Who Fell Beneath Fairyland and Led the Revels There. I'll be reading it.

You can visit the author, Catherynne M. Valente at her website http://www.catherynnemvalente.com/. 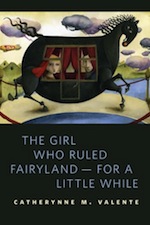 Be sure to check out Cat's page of free reads, including The Girl Who Ruled Fairyland--For a Little While, a prequel story to The Girl Who Circumnavigated Fairyland in a Ship of Her Own Making, who are, by the way, two different girls. ; )
Posted by Christine at 4:20 PM