Riders of the Apocalypse, Book One
Published 2010 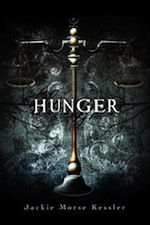 Hunger is a modern story about a teenage girl struggling with anorexia and ties her story to the biblical mythology of the Four Horsemen of the Apocalypse. Seventeen year old Lisabeth is anorexic and while she thinks she's in control of it all, she's really spiraling further into trouble. No one seems to understand her anymore--not her parents, her best friend or even her boyfriend, and she feels as if everyone is sabotaging her road to happiness. The only one who doesn't feel like a threat to Lisa is her friend Tammy, but maybe that's only because Tammy has her own secrets about eating.

In a moment of despair, Lisabeth considers suicide but is interrupted by a messenger who hands her an ancient set of scales, telling her she is Famine, the Black Rider and to "go thee out unto the world." Of course, she thinks she hallucinated the whole thing, but sure enough, the scales are there in the morning and not only that, but there's a huge black horse in her yard who looks upon her intently with anticipation as if he expects her to ride him.

Once this strange new reality sinks in, Lisabeth reluctantly accepts her assigned role as Famine and begins her nightly rides upon her black horse, traveling to exotic places around the world where hunger, starvation and death are all too familiar to the people who live there. During the day, she continues to struggle with anorexia and the powerful Thin Voice within her while her relationships with the people who care about her the most begin to crumble. Being the harbinger of Famine gives Lisabeth a lot to think about as she witnesses unimaginable atrocities of hunger and fumbles with her new found power. The question is, though, is Lisa strong enough to control her power? And if so, what is she going to do with it?

Hunger is a stark and graphic look at teenage eating disorders through the characters of Lisabeth and Tammy--both of whom could be anyone from your friend, sister, daughter or even you. The author very creatively uses the biblical mythology of the Four Horsemen of the Apocalypse to demonstrate the power of choice and how much inner strength, determination and hope someone has to have in order to fight anorexia or bulimia. Hunger is a very thought provoking, truthful and deeply profound book that twisted my gut, broke my heart, but also gave me hope for Lisabeth and anyone who struggles with an eating disorder.

Please, if you think there is any remote possibility that you might have an eating disorder... know you are strong enough to conquer it. Choose to live. Reach out for help. You can do it!

All proceeds from Hunger are donated to National Eating Disorders Association.

The next book in the Riders of the Apocalypse is Rage [April 2011] and addresses the delicate teenage issue of cutting or self induced injury. This book is the story of the Horseman of War. All proceeds from Rage are donated to the organization To Write Love On Her Arms.

The author's future release in this series will be Loss [March 2012] and is the story of the Horseman of Pestilence. This book will address bullying and I believe a villain with a disintegrating mind. All proceeds of Loss will be donated to the Alzheimer's Association.

There will be a fourth book for the final Horseman, Death, but no details about that book yet.
Posted by Christine at 2:38 PM