I tried for an abbreviated version, but it's just not possible...

The day before the lit signing, nath and her sister came to my house for lunch! Of course, they came bearing all kinds of delicious treats from Canada--ketchup flavored potato chips, gourmet flavored macaroons, fabulous gourmet jellies and two tins of REAL Canadian maple syrup. I am a maple syrup snob and ONLY eat the 100% pure maple syrup, usually from Vermont or Canada. Nath also cleared some books from her shelf and brought me a bunch of them, including Cold Magic by Kate Elliot, which I have been wanting to read for so long.

Nath and her sister are such sweethearts. I am lucky to call them friends and they spoil me rotten. : ) After nath and her sister left, I went over the list of authors who were going to be at the signing again to make sure I had everyone I wanted to meet on my list. I was disappointed to learn that historical romance author Meredith Duran wasn't on the list, so I tweeted my disappointment to her and she messaged me back letting me know she was going to be in the city on Tuesday and that she would be happy to meet up! How awesome is that? VERY awesome.

The next day was the RWA Literacy Signing in Manhattan at the Marriott Marquis in Times Square. I planned to arrive an hour or two early to meet up with some book blogging friends, but I mis-remembered the train schedule and missed my outgoing train by scant minutes. I literally saw the train roll away from the station as I got there. Argh. I should have been more attentive to the schedule and double checked the time. Fortunately, I don't live too far from the train station, so I went back home for a bit and then came back for the next train an hour later.

As soon as I arrived at the Marriott, I met up with Dru Ann in the lobby and then shortly after, nath, her sister and Kristie J found me with Dru Ann. It was so great to have finally met Kristie in person. We went to the lounge for a bit where I met Wendy, The SuperLibrarian who was awarded Librarian of the Year yesterday at the conference and Rosie. It was there that we briefly saw author Meljean Brook who gave all of us a set of her awesome Iron Seas Romance Trading Cards. She came back shortly afterwards and sat with us for a while before nath and I couldn't stand it anymore and proceeded to the ballroom for the literacy signing that had started a few minutes prior.

So, the literacy signing. What an adventure! I thought I was so organized for this event with my list of 40+ authors, arranged alphabetically and prioritized by urgency--nine MUST SEE authors, followed by GO TO THESE NEXT authors and finally the IF THERE'S TIME authors. At the very top of my list was Nalini Singh, Tessa Dare and Megan Hart. So much for organization, though, because as soon as I entered the ballroom, my head was spinning and it took a lot of concentration to keep tabs on my list while navigating the crowded ballroom. In the beginning I took time to snap a photo with an author and tweet it, but that was taking too much time, so I stopped doing that after the first couple of authors. You can see some of my tweets and photos on my twitterfeed HERE. There are photos there of me with Nalini Singh, Jeannie Lin, Megan Hart and fellow book blogger and aspiring author, Kwana. I also found Lea and we got to exchange hugs! Every single author I met was gracious and kind, clearly happy to meet their readers. I had such a good time introducing myself and exchanging a few words about their books.

Before I knew it, the signing was winding down and it was time to check out. Over $46,000 was raised at the RWA 2011 Literacy signing to benefit local and worldwide literacy programs. Isn't that fantastic? Here is a look at what I got:

I also bought the NYT best selling, self published ebook novella "Unlocked" by Courtney Milan [for only 99 cents!] using a QR Code Scanner app on my iPhone and scanning the QR Code for the book from her laptop. So tech savvy! You can do the same thing at Courtney's blog on her Literacy Unlocked post.

I also came home with a bunch of cool author swag such as bookmarks, pens and some of those really awesome Romance Trading Cards, which were "invented" by the lovely author, Jeannie Lin.

In addition, I met the following authors without buying books:
Larissa Ione ... who signed my personal copy of Pleasure Unbound
Zoë Archer ... new series to be released Dec. 2012
Jaci Burton ... I read her Wild Riders series and already have them
Christina Dodd .. who was sold out of her books by the time I got to her
Carolyn Jewel ... next historical due out next year
Heather Webber... didn't have copies of Absolutely, Positively :(

There were several authors on my list whom didn't get to see. I either had trouble finding them or I saw two or more people waiting to meet them and or I ran out of time to see everyone! One of those authors is Kristan Higgins whose books I love, but I knew she is planning to attend the NJ RWA conference in October, so hopefully I'll get to see her then--and hopefully snagging a copy of her next book, Until There Was You that releases three days after NJ RWA. 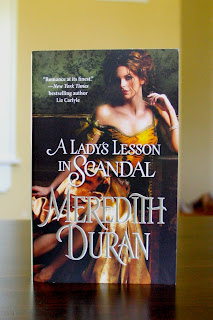 After checking out of the signing, I headed to the lounge for the book blogger bash to meet up with friends lustyreader, nath, Hilcia, Mariana, Lisa, Rosie, Wendy, Kristie, Kira <---and her super adorable baby girl, J, Kate, SarahT and Pearl. I hope I'm not forgetting anyone! We all start comparing notes on our signing adventures and Mariana asks me if I got to everyone on my list. I start to reply YES with confidence, only to realize with sunken heart that I didn't get to see Tessa Dare who was AT THE TOP OF MY LIST?!! How could this have happened?! I was SO distraught. Someone suggested paging her somehow and I got the idea to "page" her on twitter. Which I did ... with an embarrassing spelling error, too. Hey, I was nervous! The best part? Within minutes she tweeted back that she was coming down to the lounge! SO awesome!!! In the meantime, Meredith Duran arrived in the lounge and we got to meet! Tuesday also happened to be release day of her latest book, A Lady's Lesson in Scandal, copies of which I brought along for her to sign, one that I will giveaway on my blog, so keep your eye out for that. A little while later, Tessa Dare came to the lounge and there I am hanging out with Tessa Dare and Meredith Duran (squeeee!) and a handful of other very lovely readers and authors in the lounge of the hotel. I tried not to trip over my words and I think I pretty much held myself together.  It was so much fun! I didn't think the evening could be any better... until Tessa gave me this: 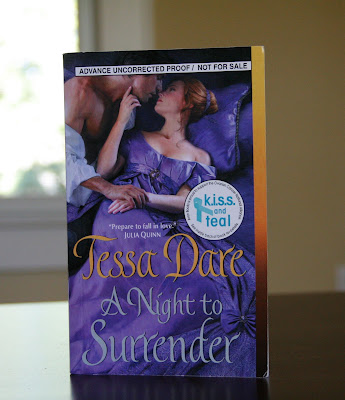 It's an uncorrected ARC of A Night to Surrender, the first book in her upcoming Spindle's Cove series that is coming out in August 2011!!!! I feel like I won the jackpot! :)

To read more about Tessa Dare and her lovely books, visit her website at http://tessadare.com.

For information about Meredith Duran and her lovely books, visit her website at http://meredithduran.com and her blog that she shares with author Sherry Thomas at http://www.sherrythomas.com/blog/.

I had such a great time meeting old and new book blogging friends and so many fantastic authors. Everyone I met on this adventure was kind, warm-hearted, gracious and fun. I hear RWA is going to be in NYC again in 2015. I'm already looking forward to it!