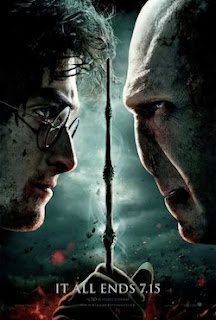 My daughters and I went to the midnight showing of Harry Potter and The Deathly Hallows Part 2 movie last night this morning at 12:01 am on July 15, 2011, opening night for the very last Harry Potter film ever. It was a really fun and special way to close the chapter on the Harry Potter experience with my daughters, which began for all of us almost exactly nine years ago when I started reading the first book out loud to them one summer night when they were 7 and 3 years old [now 16 and 12]. At the time, my youngest would fall asleep within the first several pages, but she made up for that by reading and rereading all of the books several times each over the years.

The theater was packed with muggles, a few of whom were impersonating wizards with their attire The theater was full of excitement as the audience sat waiting to witness the film version of how it all ends. When the lights were dimmed and the projector started rolling, I admit feeling a bit impatient with the reel of movie previews, which is typically a part of the movie going experience I really enjoy. I was not alone in my impatience for the movie to start, which I know for a fact because after the third preview an audience member shouted out, "Accio, movie!" Haha!


The movie was very well done but of course, the book is so much better. More detail, more action, more character development, more emotion, more depth, more plot... just more. So if you've only seen the movies and never read the books? ... it's never too late to capture the magic of the Harry Potter books by J.K. Rowling. Start at the beginning with Harry Potter and the Sorcerer's Stone.


My daughter came across this video the other day in which actors from the Harry Potter movies were asked to describe their Harry Potter experience in one word.


I think "legendary" [James or Oliver Phelps] and "magical" [Emma Watson] are the most fitting.

How would you describe your Harry Potter Experience in one word?


Have fun if you'll be seeing Harry Potter and the Deathly Hallows Part 2 sometime soon! Or if you already did... hope you liked it. :)