C This book is the February selection for the Authors by the Alphabet Book Club, representing letter C. 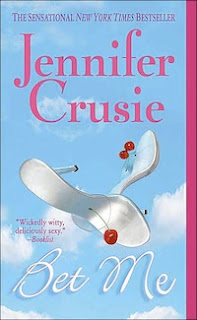 Bet Me is a fun, sweet, romantic story about two people who come together over a bet and end up taking their chances on true love. Although, in the end, you can be assured their happily ever after is a sure thing.

Min Dobbs has just been dumped by her boyfriend David in a bar. She's crushed and angry. It's not like she was in love with the guy, but she was working on it. He seemed to have all the right credentials to be 'the one,' after all. Now she's left without a date for her sister's upcoming wedding, which wouldn't normally bother her, but she'll never hear the end of it from her over-controlling mother.

Calvin Morrissey is a charmer and a heart breaker who has a reputation for dating a girl until she falls for him and then promptly breaking it off. Cal is at the same bar as Min when she has just been dumped. He's out with his friends and business partners, trying to avoid his most recent ex.

Min's friends encourage her to get over David asap by approaching a good looking guy in the bar and introducing herself. She and her friends single out Cal. As Min crosses the bar, she overhears David making a bet with Cal that he couldn't get the girl in the boring gray suit to sleep with him within a month. She realizes David means her and is obviously furious, but decides to play along just to burn David and maybe have a date for her sister's wedding in a couple of weeks to boot!

Min and Cal leave the bar together and grab a bite to eat at Emilio's Restaurant which turns out to be fabulous. The food, that is. The date, not so much. Min and Cal clash and bicker over everything! Yet there's this underlining current between them like gravity pulling them together. Yes, their conversation is prickly, but aside from the whole bet thing, they're honest and comfortable with each other to just be themselves. They part ways both happy to never see each other again--Min giving up on the wedding date idea and Cal thinking 'good riddance' to the woman who's taking out her anger against her ex-boyfriend on ALL men! Only it doesn't work out that way and Min and Cal continue to cross paths, slowly getting to know each other, quickly falling in love although of course, they don't want to admit it.

Bet Me is so much fun to read. It's fast paced, charming, funny, sweet, romantic, loaded with great dialogue and full of little surprises. The cast of secondary characters and all of the connecting side stories are entertaining and add a lot of drama and warmth to Min and Cal's love story. There are misunderstandings galore over the bet--make that bets, that will keep you laughing and guessing until the very end exactly how it will all work out.

If you haven't yet read Bet Me by Jennifer Crusie, what are you waiting for? I bet you'll just love it!

WARNING: This discussion and the comments below are a SPOILER ZONE! If you have not yet read Bet Me by Jennifer Crusie you have been warned that there are SPOILERS AHEAD. Read at your own risk.

BOOK DISCUSSION:
This is my first time hosting the book discussion for the monthly Authors By the Book book club and Bet Me by Jennifer Crusie was my selection. If we were a book club that met offline, we surely would have had to met at a little Italian restaurant where we could chat about Min and Cal and the supporting cast of characters over Chicken Marsala, don't you think? ;)

Bet Me is a cute, light hearted romance. The characters and story is engaging yet my questions are quite simple.


1. What did you think of 'the bet'? Do you think Min should have just asked Cal about it or do you think she was right in waiting for him to reveal it himself?

I thought the misunderstandings over 'the bet' were great. It kept things unsettled throughout nearly the entire book with both Min and Cal keeping what they knew about the bet to themselves instead of being honest about it. I mostly wanted Min to just ask Cal about the bet, but I completely understood that she wanted him to be the one to bring it up. It was her way of protecting herself from disappointment if the truth was that he really was just dating her for the bet. And even then, how would she have known if what he said was the truth if she did ask him. He could easily lie to her and still win the bet, right? The answer is that the only way she would believe him would be to trust him. Something that was difficult for both Min and Cal to do for a while. Thank goodness they straightened it all out and finally figured out to take that leap to trust and love each other regardless of that stupid bet. And how fun was that??? :)

2. What is your favorite scene in the book?


I have many, but here are a few of my favorites:

Another favorite scene is when Min, Bonnie and Liza are having dinner at Min's apartment and Liza tells Min that Cal is trouble and Bonnie tells Min that she thinks he's 'the one.' Liza and Bonnie had completely opposite views on Cal and I loved how convincing and determined Bonnie was when she stood up for believing in true love. She has some really great lines in that scene. [pp. 169-172 in the hardcover edition].

I also loved the very end of the last chapter [before the Epilogue] when Min and Cal discuss whether they'll actually live "happily ever after" once they're married.

3. Who is your least favorite character and why?


While I thought David was pretty much a jerk, I didn't think so highly of Cynthie either, although by the end I did feel sorry for her. My least favorite character, though, has got to be Min's mother, Nanette. Her obsession with controlling Min's diet and putting so my emphasis on her figure as an indicator of her happiness in life was crazy! At first, I thought Nanette just wanted to help Min fit into her maid of honor dress, but soon enough I figured out that she was just shallow and mean to reduce Min's self esteem, the last thing a mother would want to do to their child! Ugh. Although Min often told her mom to get over it, she was born with curves, end of story, it wasn't until Min's sister Diana finally told off Nanette that I finally cheered.

4. Who is (are) your favorite secondary character(s) and why?


I think the cast of secondary characters in this book is awesome. Cal's friends Roger and Tony, Cal's nephew Henry, Shanna, Min's friends Bonnie and Liza, and her sister Diana are all favorites. Everyone comes across very realistic and I enjoyed all the little side stories that were going on. Maybe Bonnie is my absolute favorite of that bunch. She had such a great attitude and despite her sometimes too-rosy view of life, she had some really great insights for her friends.

5. Do you believe in the fairy tale ending of finding true love and living happily ever after?


I imagine most of you do, otherwise you wouldn't be reading a book like Bet Me! :)

At very nearly the end of the book, Min says she's worried about what comes after the fairy tale ending:

"--but I'm worried. There aren't any happily ever after stories. That's where it ends. Where the hard part starts."

"We're going to take it one day at a time," Cal said, holding on to her. "I don't know anything about this, either, I didn't plan for this, but I think we just stick together. Take care of each other. Pat each other on the back when things get tight." When she still looked unsure, he smiled at her with so much love in his eyes that she went dizzy, and then he said, "Bet you ten bucks we make it."