Last Monday, my eldest daughter and I skipped out of town for a few hours and drove into New York for the evening. With my new car that I had only had for less than 48 hours. I'm so brave.

A few years ago, my eldest daughter befriended another teenage girl in Austria while doing some creative writing with a Twilight role playing group on myspace, essentially becoming modern day 'pen pals' of sorts. They would instant message each other--under parental supervision, of course, and then eventually maintained their friendship via facebook and occasionally video chatting when they could align their respective free time with each other, all around the time difference between them. So her friend was recently visiting New York City for a few days and Monday was the only day she was free. So of course, being the awesome mom that I am, I took her into the city to meet her 'pen pal' in person for the first time. This couldn't have worked out with my husband being the awesome dad he is, having come home early from work that day to mind the others in the castle (his dad and our youngest daughter).

Seeing the girls meet for the first time was like something right out of a movie. Her friend was waiting by the fountain outside the famous toy store, FAO Schwarz searching the faces of the passersby for my daughter. My daughter spotted her right away and could barely wait for the light to turn in our favor so she could cross the street to her friend. Just as she gets to her, she calls out her name. Her friend turns around, their faces light up with smiles, eyes glassy with tears of joy and they hug each other as if they were long lost friends who haven't seen each other in ages. It was very, very sweet. Here is a photo I took of them within minutes of having met in person for the first time: 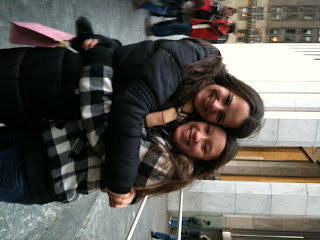 Vicky and Maria
Aren't they adorable? After a few moments of "Wow, you're here!" and more hugs and laughter, the girls proceeded to go shop and I was to meet them outside The Plaza hotel in two and a half hours. I don't think I would have had the strength to let them go off on their own like that if it weren't for cell phones and GPS tracking. And the fact that they promised to stay on 5th Avenue between FAO Schwarz and Rockefeller Center... which is pretty much where I was going to be, one or two blocks behind them. LOL. Well, not exactly, but pretty much.

So how did I spend those two and a half hours on my own? First I spent an hour or so with Dru Ann who blogs at notes from me. I knew Dru Ann worked in the city, so I sent her an email earlier in the day hoping she had the time to meet me for a little bit and sure enough, it worked out perfectly. Dru Ann and I strolled along 5th Avenue, chatting about all kinds of things like New York things, our mutual friend Brandy and how much we would have loved to have her there with us, too, a little about family, and whatever else came to mind. All the while, we savored the amazing lights and creative sights of the windows of Saks and other stores. She even brought me into Tiffany & Co. where we stood in awe of the Tiffany Diamond. That's 128.54 carats. Whoa baby. 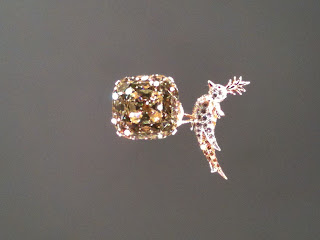 The Tiffany Diamond
I wasn't such the photographer this evening as I didn't even bring my camera! I don't know what I was thinking... or not thinking. So these first few are taken with my iPhone. 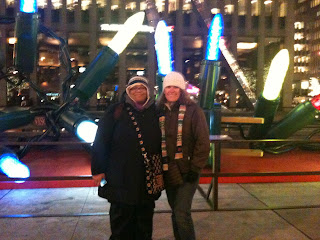 Dru Ann and I
I had such a nice time meeting Dru Ann and walking around with her. She is truly a lovely person. Thanks for making time in your day for me, Dru Ann! :)

Soon it was time for Dru Ann to head home and I was on my own for a while. After walking around the city for two and a half hours in the freezing cold (literally), I decided I needed to go sit someplace warm until it was time to meet my daughter again. I headed to the Time Warner building at Columbus Circle where I knew there was a Borders. I figured I'd sit and flip through some Christmas cookie magazines. Well, I forgot there was a Williams-Sonoma store on the first level, so I hit there first. What a smart idea, let me tell you. I wasn't even inside Williams-Sonoma for two seconds and I was being offered a sample of hot mulled cider. I'm sure I looked like I needed it, too! I started to thaw while admiring really expensive French skillets. I wandered some more and came across some candy samples and tried a champagne gum drop. Yum. I wandered further into the store where a salesperson was serving brownies with peppermint bark baked on top. Right next to the test kitchen was the section of Williams-Sonoma signature dish soaps and hand moisturizers where I sampled the "Winter Forest" lotion and my dry, chapped hands were very happy and it smelled just lovely, too. Now that I had some drink, food and spa treatment-- boy, do they know how to treat their costumers, or what? Thanks Williams-Sonoma!-- I headed upstairs to Borders where I flipped through some magazines before finally meeting daughter.

At this time, I met up with my daughter, her friend and her family and friends with whom she was traveling outside The Plaza Hotel. We then found a local pub and had some dinner. All too soon, I had to give my daughter the sad news that we needed to head home. I felt badly about having to make the girls say good bye after only four hours together, but it was already after 8 pm on a Monday night and we needed to call it a night. 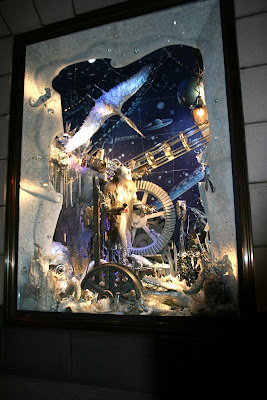 One of the window displays at Bergdorf Goodman.
I recommend you click on it and zoom in to see some of the detail of this display. The photo really doesn't do it justice. 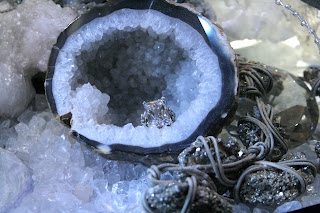 This is a sample of one little detail at the floor of the display. Or rather, not so little. Get a load of the size of the stone on that ring!

Of course, we paused at Rockefeller Center for a few quick photos. 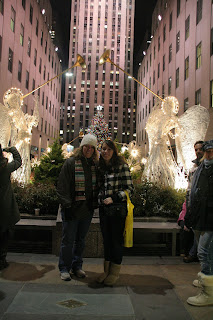 I and my daughter
We noticed a band playing there, and much to my teen's excitement, it was My Chemical Romance. We were actually along the street that went behind the stage, but we were so close, nonetheless. To their backs, anyway. LOL. She was patient, though, and eventually got a few pictures of the band with the lead singer dude actually facing us. Ah, the things that rock a 15 year old's world...

I hope you enjoyed my little glimpse of 5th Avenue decked out for Christmas! :)
Posted by Christine at 4:50 PM