This is the round up post for the seventh month of the In Death Reading Challenge.

Link up any In Death posts you made this month here. If you made a post on your blog whether it be a review or commentary, please grab the link to your post and enter in the Mr. Linky below along with your name so we can find each other's latest In Death posts easily. 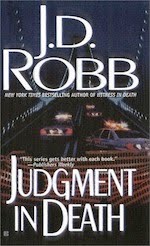 Judgment In Death by J.D. Robb
In Death series, Book 12
Judgment In Death begins with Lieutenant Eve Dallas moments after arriving at the scene of a violent murder in a high class strip club called Purgatory. A bartender of the club, the victim had remained alone at the club after hours to close up and meet someone he knew when he was bludgeoned to death and left behind the bar in a pool of blood and broken glass. To complicate things, the club is owned by none other than her husband Roarke and the victim is a cop. A good cop who worked hard at his job, had a clean record and was liked by everyone. As Eve proceeds with her investigation, more cops are found dead--all from the same precinct. The further she investigates, the sticker the situation becomes as fellow cops are under question and the Internal Affairs Bureau (IAB) appears to be involved in some way as well. Not to mention a mysterious connection to an elusive criminal and ex-business associate of Roarke's from 10 years past, Max Ricker. Roarke and Ricker parted on extremely unfriendly terms years ago and now both Eve and Roarke's lives are in danger. Sounds like just another day in NYPSD for Lieutenant Eve Dallas, but this case really ramps up the tension for our fearless cop and quite frankly, had me on the edge of my seat as well.
Judgment in Death is fast paced, action packed and emotionally packed as well. Eve's professional and personal lives are intricately meshed together in this story. The murder investigation becomes personal by its inherent nature simply because it directly involves her own people, and when Ricker's involvement starts to come to light, it becomes even more personal due to his ties with Roarke. On the personal level, this case creates a lot of tension between Eve and Roarke. They fight--and make up-- throughout the book, usually over control issues. They're both such strong individuals with strong instincts to protect each other. Which creates a crazy conflict because both of them are risk takers and neither of them are willing to let the other take risks. Their love sees them through, they communicate, they compromise and they come out better for it all every time.
. . . . . . . . . . . . . . . . . . . . . . . . . . . . . . . .
DISCUSSION TOPIC:
I know it's not very nice to find enjoyment out of watching someone face their worst fears, but I have to say, I get a kick out of Eve's extreme fear of heights. Or rather, I get a kick out of Roarke pushing the limits of Eve's fear of heights! In Judgement in Death, Eve needs a really fast ride somewhere and Roarke takes her in one of his hybrid two-seated flying car things. She tries to be brave, but it's still so funny when she's not. I get such a kick out of scenes like this one and as the series progresses, I'm finding more and more of these minor character traits that pop up throughout the stories that really add depth and personality to the characters. I think it does wonders to keep the characters very real.
What other character traits have you picked up on throughout the series that you think adds to a character's personality?