I had grand plans for spending quality time in the kitchen baking homemade rolls, making lentil soup, churning homemade pomegranate sherbet, and canning Tracy's Apple-Cinnamon jam. Doesn't all of that sound great? Instead, I spent my weekend playing Beatles Rock Band with the family (so fun!), reading my library loot, running (4 miles on Saturday), napping, spin class (early this morning), and um... napping again. All of which was really great.

In lieu of those other recipes I had planned, though, I'm just going to talk about carambola or star fruit since we got some of this exotic fruit in last week's organic produce share and tonight I tasted one for the very first time!

Star Fruit or Carambola is a tropical fruit that is thought to be native to Indonesia, India and Sri Lanka, but is now grown in may tropical and subtropical regions, including in Florida and Hawaii in the US. Star fruit is very low in calories, but high in antioxidants, Vitamin C and other vitamins and minerals. It is also high in fiber.*

A star fruit is ripe when it is yellow with a slight green tinge and brown along the edges of the 'star.' The one I cut up was probably borderline overripe as it also had a lot of brown spots. I have three other fruits that are still green, so I'll try to eat those as they approach their optimum ripeness this week. 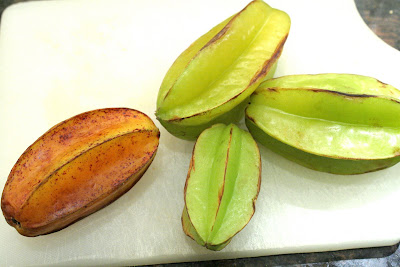 To cut up the star fruit, first trim off a bit of both the blossom and stem end using a paring knife. 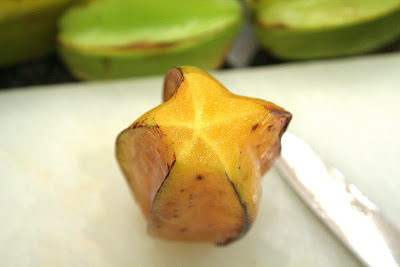 Then carefully trim a bit of the brown along the edges of the 'star' and cut the star fruit horizontally into slices. Remove the occasional seed from any slices with the tip of the knife. 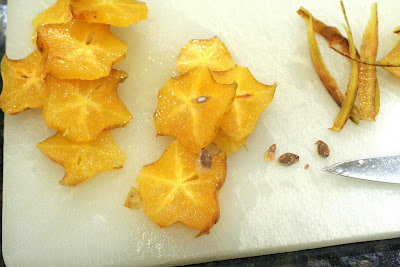 Then enjoy on its own or in a fruit salad. 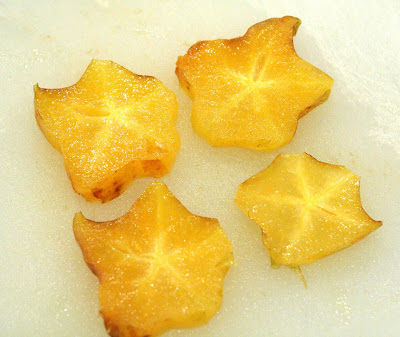 To me, the star fruit has a sweet flavor reminiscent of pears and oranges, with a texture between a pear and a melon. It was delicious and refreshing, and given its healthfulness, star fruit will now be making a regular appearance in my diet.**

I hope you give this healthy and exotic fruit a try the next time you see it at the market.

**Note: Star fruit is high in oxalic acid and may be a health risk for some individuals with kidney problems and can also interfere with the effectiveness of certain drugs.
Posted by Christine at 9:38 PM

Labels: in the kitchen