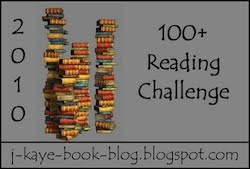 Details: For more details, including rules and where to sign yourself up for this challenge, visit J. Kaye at 2010 100+ Reading Challenge

I'm going to aim to read eight books per month, with the exception of ten in each July and August to make my goal of 100 by December 31, 2010.