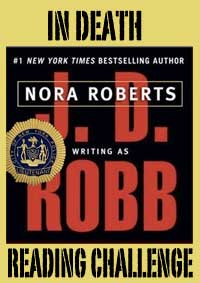 In Death Reading Challenge
This is the round up post for the first official month of the In Death Reading Challenge. If you read at least one In Death book in the month of January, congratulations on fulfilling your first challenge! If you made a post on your blog, whether it be a review or commentary, please grab the link to your post and enter in the Mr. Linky below along with your name so we can find each other's posts easily. If you're just going to keep a running list of the books as you read them, grab the link to your post where you'll be keeping track of your list and enter in the Mr. Linky so we can recognize your success this month. This will also help me keep track of who's eligible for my challenge giveaway in April. Thanks for participating!

As I stated in my challenge post back in November, I read the first four books in the series in early 2007, nearly two years ago. Two friends of mine generously gifted me autographed copies of the first three books for and I no sooner had them in my hands when I bought a used set of the first 29 In Death books on ebay. So with the first four In Death books under my belt by March 2007 or so, nearly every month since then, I've told myself I should read another book in the series if I were ever going to catch up, and every month I failed to do so. Until this month, that is, thanks to the challenge.
Ceremony In Death by J.D. Robb
In Death series, book 5 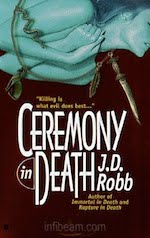 This past week, I picked up and read the fifth book in the series, Ceremony In Death, and I was immediately drawn into the futuristic world of Eve Dallas once again, and feeling like I picked up where I left off two years ago as if it were last month. It's so good to be back on track. Hopefully this challenge will help me stay on track this time.

In Ceremony In Death, the story starts with Eve Dallas investigating the murder of one of the police department's own and no sooner does she start her investigation that she then has a string of connected murders to solve, all tied together somehow to two very different religious factions-- a Satanist cult and a Wiccan group.

The murder mystery in this story kept me guessing almost right to the end, which is always good. As for the emotional and relationship aspects of the story, again, this novel did not disappoint. It seemed to brim with interesting developments and dynamics in numerous relationships. As always, Eve and Roarke just live on these pages. One can't help but love the way Roarke loves Eve, cares for Eve, and knows Eve. I love the way her life, her world, her business is unquestionably, irrevocably his as well. He takes charge of taking care of her. Eve's relationship with her senior officer and mentor, Feeney gets tested in this story and what went down between them, what it did to both of them emotionally, and how it came back around, all important to the story and the character development and quite moving, too. A little bit of the same thing goes on between Eve and her aide, which was healthy for their relationship as well. We can't have her aide kissing up to her all the time, now can we? That wouldn't advance either one professionally or personally. I really enjoy all of the characters in this series and look forward to more from them and their world in the next book, Vengeance In Death.

In Death Book Covers
Within the set of used book collection that I bought, I have three books that have a very different cover than the typical In Death book, in that the cover art features an unusual blue lady. My first thought was that these blue lady covers were odd looking and I didn't like them as much as the newer ones featuring a city image or the even more recently issued books that have the more modern lines, graphics and colors. Here's a visual case study of the fifth book, Ceremony In Death in it's different issues. From left to right, The "Blue Lady" cover, The "New York" Landmark cover, and the newer Neon book covers.

I found some interesting information about the covers on the indeath.net/wikiindeath site. It turns out that the "Blue Lady" covers are the original US cover versions for the first seven books in the series, all featuring a lady with blue skin. Later the series picked up with "New York Landmarks" or other backgrounds. The site also indicated that many serious collectors of this series deem the "Blue Lady" covers must haves in a complete collection. So now, of course, I think it's pretty darn cool that I have three out of the seven "Blue Lady" covers and I'll be hanging on to them for sure.
I also wanted to mention there are UK versions to the covers as well, and they are very nice.

Starting with Survivor In Death (book 23), the cover style was changed to the style used today for the In Death reissues and new releases, known as the neon colored covers.

What do you think of the covers?
Do you own any "Blue Lady" covers?
Which is your favorite book cover style?

Posted by Christine at 8:08 PM