Latkes are basically potato pancakes fried in olive oil. Latkes are traditionally served during the Jewish holiday of Hanukkah as a reminder and celebration of the miracle of oil during the rededication of the holy Temple of Jerusalem in 165 B.C.E. after it had been seized by the Syrians several years prior. When the Maccabees reclaimed their Temple, they found only enough olive oil to light the menorah in the Temple for one day, but it miraculously lasted eight days.

If you celebrate, I wish you a very Happy Hanukkah!
My family doesn't celebrate Hanukkah, but we have attended a parties at our friends' houses over the years and latkes are definitely the culinary highlight of the festivities. Latkes are traditionally served with sour cream and or apple sauce, but you can eat them any way you like any time of the year!

I added parsnips to the traditional potato mixture because I had a few on hand. You can also use carrots or sweet potatoes in place of the parsnips, or just use all potatoes. Shred potatoes, parsnips and onion on the large holes of a box grater or using your food processor. 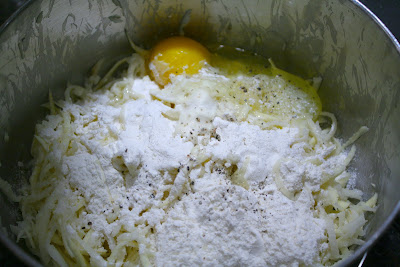 Combine in a bowl with the flour, egg, salt and pepper, and mix well.

Heat half of the olive oil in a large skillet until hot. Divide the potato mixture into eight equal portions shaped into rough pancakes. Carefully lay latkes into hot oil, gently flattening the latke with a spatula. Cook 2-4 minutes until latkes start to brown. If the latkes are browning too fast, lower the heat a little so that the insides cook through before the outsides start to burn. 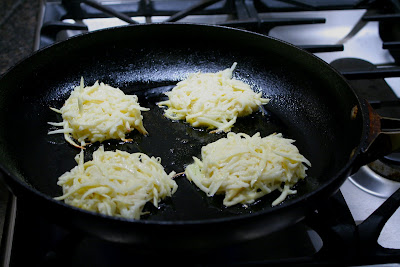 Carefully flip the latkes over and cook on other side for 2-4 minutes more or until browned. 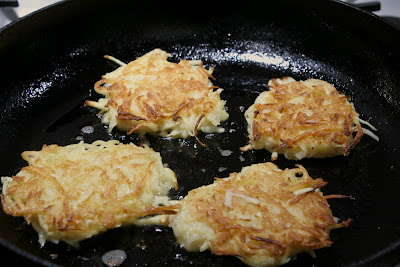 Remove latkes to a plate lined with paper towels. Repeat the cooking process for the last four latkes. Serve hot.

Labels: holiday, in the kitchen, recipe