I can't believe it's been over a week since I last posted. Where does the time go? I had such plans for posting all kinds of things this month for the holidays and it's so not happening. I know I still have time, but barely! This is such a busy month for me--for all of you as well, I'm sure. Christmas is a only two weeks away and I've barely done a thing to get ready. Put candles in the window, ordered some books and dvds from amazon, and made a few lists, but that's it! Which doesn't exactly support my excuse for being so busy this month, now does it?! Never mind, I'm just going to spill what's been on my blogging mind lately and we'll catch up from there.

Cooking
I never got around to posting last Thursday's organic goodness, even though I did manage to snap a photo of it all spread out on my dining room table before putting it all away. Since the growing season here in my area has pretty much ground to a halt as winter approaches, the produce we're getting from local farmers is more the long term storage type produce like potatoes, squash, rutabagas, stuff like that. We got celeriac in the order last week, which would have been fun to blog about since it's not so well known, but we ate it already. Throughout the winter, we'll get more and more produce from Florida and California where the weather is warm and sunny and farmers can grow yummy fruits and vegetables all year long.

I've started cooking a lot of my family's favorite cold weather foods lately and have even even been photographing a lot of it, with the idea that I'd share my recipes here, but I haven't gotten around to posting them. By the time dinner is ready, we eat, clean up, help the girls with homework, get the tween to bed, help the teen more with homework (gotta love those Geometry proofs and 10+ page biology lab reports), poof! It's 10 o'clock at night! At that point, I'd rather spend an hour or so reading my latest book or some nights, weight training with my husband in the basement. I started lifting weights with him regularly in September as part of my new and improved workout regime. Plus it's something we're doing together, alone, so the benefits are doubled! Maybe I'll catch up on a few of those recipes over the weekend.

Running
I know I've been mentioning the running thing a lot on my blog lately and you're probably tired of hearing about it. The thing is, it's still a novel, exciting thing for me, and I'm honestly still in awe that this new runner person is actually ME. It's been consuming a lot of my thoughts lately. A lot. :)

Last week my running class did something different and did some trail running in a nearby wildlife reservation (the same one that challenges me on the bike with the hills). Trail running was so much fun. It was a bit muddy and a bit cold, but the views were so pretty, and it felt exhilarating to be running in the woods over roots, over footbridges, and around the lake. There was no one else around; it was so peaceful. Just six women running wild in the woods. Or rather, six women running in the wild woods. We weren't really wild. Here's a photo I took on the run: 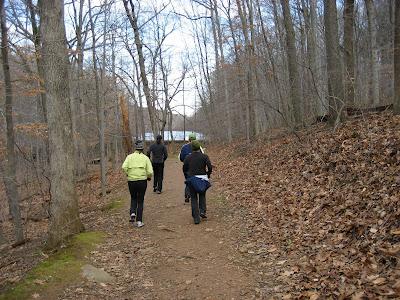 I've also started running with my running partner from class on the weekends. We ran together last Saturday and ran over 5 miles in the cold rain that turned to snow before we were even done! It was awesome! (<-- I can't believe this is me saying this)! I think our time was even better than the 5 Mile Run the previous weekend. How the heck we did better in the cold rain, I have no idea. I think something just clicked with me and the running thing. Now my heart rate is nice and steady during a run. It's like my heart, lungs, and legs finally found the runners groove! New York City Marathon 2010, here I come! Okay, not really. Maybe a 10K. :)
Library Loot
I didn't get any library loot this week. I'm trying to catch up with the loot that I already have before I forget all these due dates. It drives me nuts to accrue library fines. I've ben really happy with the books I've been reading lately and I recently realized how much I miss posting reviews. I think the last one I wrote was in early September!

In the meantime, I've been doing a lot of planning for next year by joining a bunch of different reading challenges. I know, I know. I joined four in 2009 yet you haven't really heard much about that all year, have you? I actually did okay with two of them, but kind of bombed the other two. But what good is a challenge if it doesn't challenge you, right? I plan on posting a year end reflection on each of my 2009 Reading Challenges and also on each 2010 Reading Challenge that I'm joining. Including the In Death Reading Challenge that I'm hosting!

Speaking of the In Death Reading Challenge, I'm really excited about hosting this in 2010. There are and some very enthusiastic readers are already out of the gate! Orannia is just about all caught up in the series already, but recently posted her review of Promises In Death on her blog. Then there's Lori who has gotten a jump start and has read and reviewed the first three In Death books; Naked In Death, and Glory In Death and Immortal In Death. Thank you both for your enthusiasm! I feel so honored really, that my Challenge may have been the final straw on the proverbial camel's back that got Lori to finally read this series. Go check out her reviews. She discusses some really great insights to the characters and the series as a whole. If you haven't read the 'In Death' series by J.D. Robb yet, or if you've got a handful of books to read before you're caught up, why not join my In Death Reading Challenge? It'll be fun to read and discuss these stories together throughout the next year or two. Or three. You can find details about the challenge by clicking the In Death Reading Challenge on my left sidebar.

The Pioneer Woman is in New York City!!
Ree Drummond, otherwise famously known as the Pioneer Woman, is in NYC on her book tour tonight at Borders at Columbus Circle and then again on Saturday at Posmon Books at Chelsea Market. If you don't know who she is, you've got to visit her at http://thepioneerwoman.com, but be prepared to get lost there for hours. So much great stuff to check out. Anyway, I would love to go see her at one of these two signings, hear her speak, check out her boots, and of course, get a cookbook signed, but I hear she is drawing HUGE crowds to her signings. Hundreds--as in upwards of six, seven eight hundred fans. I'm not kidding! I just can't bring myself to stand in line for hours and hours and hours and hours and hours . . .
If only I had that time turner for real! ;)

Posted by Christine at 2:45 PM