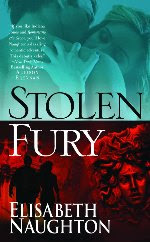 Stolen Fury is author Elisabeth Naughton's debut novel, and first in the Stolen trilogy--a romantic suspense trilogy immersed in archaeological treasures and those who seek them.

Archaeologist Dr. Lisa Maxwell has spent well over a decade researching the existence and possible whereabouts of three ancient marble reliefs based on the three Furies in Greek mythology. For strong personal reasons, Lisa Maxwell has developed a dangerous obsession with finding these elusive artifacts. At the opening of Stolen Fury, Lisa Maxwell narrowly escape with her life after having descended into a deep cave on Jamaica where she has found Alecto, one of the three Furies.

Before continuing with her quest to secure the other two Furies, Megaera and Tisiphone, Dr. Lisa Maxwell proceeds to Milan, Italy where she gives a presentation at the University there. It is at this presentation where Lisa meets Rafael "Garcia" when he rescues her, so to speak, from unwelcome advances from one of her colleagues. Rafael invites her out for a drink and one thing leads to another and they are in Lisa's hotel room about to indulge in a single night of passion. Before they consummate their passion, however, Rafael drugs Lisa and steals Alecto from her hotel safe.

Lisa wakes up furious at herself for giving in to Rafe's seduction and even more so for allowing Alecto to be stolen from her after all she's done to get her hands on it. Relentless in her determination to secure all three Furies, Lisa enlists her twin brother's expertise as a Chicago detective to determine Rafe's true identity and whereabouts. She finds out that Rafe "Garcia" is art thief Rafael Sullivan. She shows up at his Florida doorstep within a week of their encounter demanding he return Alecto to her. Of course, he doesn't give up the artifact for he has his own reasons for wanting the Furies. However, he acknowledges Lisa's drive and skill, so he convinces her to team up with him in their search for the other two artifacts. Both are reluctant to join forces, but she has the archaeological knowledge and skills and he has the resources, and together they're more likely to unearth the remaining Furies before someone else does, and there are definitely other factions out for the Furies. Both Lisa and Rafe think they will figure out a way to dump the other once they've acquired all three artifacts. What neither one don't count on, however, is falling in love along the way.

Stolen Fury is a smart and sassy romantic suspense with action and adventure, a complex plot and characters full of passion and depth. The adventure begins on the very first pages and is non stop until the very end. From dangerous descents into caves to car chases to dodging bullets to dives into deep blue holes in the Caribbean, the adventure never seemed contrived and always advanced the plot. The plot surrounding the competition trying to take out Lisa and Rafe and find the Furies themselves was complicated, but not so much that it's difficult to follow, and added surprise plot twists and character developments to an already exciting suspense. In addition, the cast of secondary characters that included Lisa's family, particularly her twin brother; Rafe's family including his mother, younger delinquent brother, and his ex-wife really added extra depth and humanity to the story, making the Stolen Fury that much more memorable.

At first glance, I was expecting the main characters Dr. Lisa Maxwell and Rafe Sullivan to be casted to stereotypical roles; the over ambitious archaeologist out to prove herself and the ruthless, conniving thief who would stop at nothing from achieving his fortune. They join efforts and fall in love, the end. On the contrary, the author surprised and delighted me with these two characters. Their motives for hunting for the three Furies are not at all what I expected and not what each expected of the other, either. I loved discovering the hidden depths of character at the same pace that they each learn about each other as well. Learning about Lisa and Rafe's pasts, their families, and what drives their ambitions added to the mystery and suspense of the plot and at the same time softened their tough treasure hunter exteriors. Not only that, but their motives and agendas sort of shift as the story progresses, leading to some very tender scenes and character revelations.

Oftentimes a novel of romantic suspense is either character driven or plot driven, yet in the case of Stolen Fury, the author successfully accomplishes both. Naughton has written a tale that expertly intertwines the personal journeys and the love story of the main characters with the action plot that the two become one and the end result is an extremely entertaining and rewarding novel.

Brimming with real adventure and suspense, passionate characters, lively dialogue, and a tender romance, Stolen Fury has easily become one of my favorite reads this year.

GRADE: A
What other readers are saying about Stolen Fury:
Sandy M. at The Good, The Bad & The Unread
Sarah at Monkey Bear Reviews
Casee at Book Binge
Daniel S. Boucher at The Novel Blog Check it out... from a man's perspective!

Stolen Heat, the second novel in Elisabeth Naughton's Stolen trilogy hit bookshelves just yesterday and I can barely wait to read it.

Look for the third installment in the trilogy, Stolen Seduction in January 2010.

Be sure to check out the amazing contest Elisabeth Naughton is running through August 15, 2009.