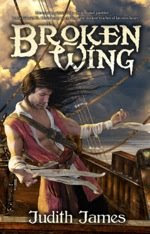 Broken Wing is the debut novel by author Judith James, published in November 2008. It was my intention to read Broken Wing in late 2008 after it received so many raving reviews from romance readers starting with the glowing recommendation from KristieJ of Ramblings On Romance, but life got in the way and I never even got around to buying the book. It turns out I wasn't the only one, as orannia of Walkabout figured out, and she instituted a Broken Wing Reading Challenge, motivating me to finally read it.

By the way, there's an interesting post at The Good, The Bad, and The Unread titled Can A Blogger Make a Book? written by Wendy the SuperLibrarian about how Kristie may have single-handedly spurred the success of Broken Wing. Definitely food for thought.
_ _ _ _ _ _ _ _ _ _ _ _ _ _ _ _ _ _ _ _ _ _ _ _ _ _ _ _ _ _ _ _ _
An historical romance set in the Napoleonic era, Broken Wing is an epic tale of adventure, survival and love. Lady Sarah Munroe and her half brother Ross, Earl of Huntington, have traveled from England to a Parisian brothel in order to find their young brother who has been lost to the family for the last five years. It turns out young Jamie has been living in the brothel, yet has survived the ordeal unscathed only because he was under the protection of the brothel's most prized prostitute, Gabriel St. Croix. Abandoned when he was a young child, Gabriel St. Croix's past is hauntingly disturbing. He was sold and traded, used as a catamite and later bound in servitude to the Parisian brothel. His sordid life has left him cold and distant, yet despite all of this, he was compelled to protect a Jamie from a similar fate, often at great cost to himself.

When Sarah and Ross are reunited with their young brother, they can hardly believe he is unharmed. When they explain to Jamie that they will be taking him home, Jamie refuses to go anywhere without Gabriel. Sarah and Ross are incredibly grateful for Gabriel's care and protection of Jamie, so while Ross is reluctant to bring a prostitute to live in his home, Sarah convinces him that it would soothe Jamie to have his protector at his side as he adjusts to a normal life again. Ross and Sarah establish a employment contract with Gabriel for one year of service as a companion to Jamie, an offer that Gabriel does not hesitate to accept, knowing it is a rare opportunity for a life finally free of violence, abuse and prostitution. Perhaps he can actually be at peace.

Gabriel is welcomed in Sarah and Ross' home like family, but Gabriel remains cold and distant. Obviously his experiences so far in life have left him with little, if any, concept of what it's like to belong with someone . . . family, friend, or lover. With patience and through simple companionship, Sarah teaches, or rather, shows Gabriel these things not just because she feels compelled to heal him, but because being with Gabriel, sharing life's simple beauties simply comes naturally to her. She doesn't set out to make him forget his past or make him forgive those who abused him. Rather she accepts him for the man he is and only wishes to show him that he can still have family, friendship and love. While Sarah is not unaffected by Gabriel's inherent sensuality, she first and foremost recognizes a man who could use a friend. In time, and through innocent friendship, Gabriel learns about friendship, acceptance and eventually they fall in love.

At about the halfway mark of the novel, Gabriel and Sarah separate for what they hope is only six months, but an unfortunate series of events tears them apart for much longer. During their separation, Gabriel is subjected to more atrocities. Some he commits himself in order to stay alive, and some that are not only cruel in their own nature, but doubly cruel because it seems he is destined to repeat living a life of abuse and deviant servitude. Thankfully he has warm, loving memories of Sarah's companionship and affection and he has befriended a Frenchman during this time of separation, both giving him the strength and courage to persevere yet again, and this time to hopefully do what he must to beat his demons once and for all. It is difficult, however, after living the life he has to believe oneself worthy of things so pure such as unconditional acceptance, friendship, and love. He never forgets what Sarah has given him, but he struggles to once again find himself worthy of such things from her--a struggle that costs them both dearly.

Broken Wing has a larger than life feel to it, in part, I think, because of the time span of the story and in part to wide array of settings at which the story takes place. Unlike most romance novels that take place over a few short months or even days, Broken Wing takes place over four years which in addition to making the romance part that much more realistic, it also lends a superb epic tone to the novel. There are also enough flashbacks and references to the past that make the novel feel like it spans a lifetime.

The story also takes the reader to the most amazing albeit frightening places. From a brothel in Paris to a stately manor along the ragged coast of England; from a privateer's ship sailing stormy seas to cities along the Barbary coast; from rebel fighting in the deserts of northern Africa to the beautiful countryside of Morocco and back again to Paris and London. All with amazing attention to historical and descriptive detail right down to the food, clothing, and weapons. Author Judith James certainly paints a vivid picture with her words.

Broken Wing is a most beautiful and memorable historical romance. It's not a simple story of romance and happily ever after. It chronicles the dark adventures of Gabriel St. Croix, who despite living a life of travesty after travesty, finds true, unconditional love and acceptance in an amazing woman, Lady Sarah Munroe, whose words and affections nurture him in ways he never imagined. Broken Wing is an achingly beautiful, epic romantic tale of survival and love.

You can visit author Judith James at her website http://www.judithjamesauthor.com.
Posted by Christine at 11:12 PM