REVIEW: Secrets of a Summer Night by Lisa Kleypas

Wallflower series, Book 1
Published: November 2004
TBR Challenge REVIEW (March 2009)
This is in essence my review for last month's TBR Reading Challenge. I actually read all the books for my four Reading Challenges before the end of March, but just didn't get around to writing the reviews. Ah, C'est la vie. 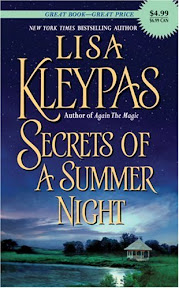 Secrets of A Summer Night is the first book of four in the Wallflower series by Lisa Kleypas. The story opens outside a London theater in 1841 with the heroine Annabelle Peyton and her adolescent brother Jeremy setting out to see the latest panorama show. Hard times have befallen the Peyton family since Annabelle's and Jeremy's father died, leaving them and their mother facing great financial difficulties despite their well-born social class. Much to their disappointment, Annabelle and Jeremy discover that they do not have enough coins between them to buy two tickets to the show after all. However, an acquaintance of Jeremy's named Mr. Simon Hunt approaches them and insists on treating them to the show. It is there in the theater, when the lights go out for a brief moment, that Simon Hunt steals a tender, albeit passionate kiss from Annabelle, murmuring his apologies just before disappearing into the darkness. The lights come back on and Annabelle is shocked and embarrassed by the kiss, but also acknowledges her own willing and heated response. Noting the effect Mr. Hunt had on her and aware that he is born to a lower social station as she, Annabelle makes a point to herself to avoid him at all costs.

Two years later, Annabelle is at the end of the third season and still has not found a husband. While she has had offers of financial stability in the form of a mistress to several men, Annabelle is determined to enter a respectable marriage and refuses such a relationship. By now Annabelle has become a wallflower at balls, nearly never asked to dance, for the men know she is on the hunt for a husband. The only man who does ask her to dance is Mr. Simon Hunt, who attends some of the same balls. Simon appears to be the only man not weary of Annabelle's intentions of securing a husband, and repeatedly asks her to dance. She is set in her resolve, however, that he is a dangerous man and she in turn repeatedly declines him.

Annabelle develops a camaraderie with three other young women who are also considered wallflowers and together the girls make a pact to help each other secure a husband, one by one until all four of them are married to a man of proper wealth and station. Once the pact is made, the wallflowers decide to attend a holiday at the country estate of the renowned Lord Westcliff, hoping to secure a husband for Annabelle. It is on this holiday that Annabelle and Simon cross paths yet again. Initially Annabelle is a bit short with him, but as their contact continues, their banter becomes more witty and friendly and she begins to develop feelings for him. Feelings that she tries to dismiss so that she can find a suitable husband, but in the end, circumstances drive them together.

First, I have to say that I love the premise behind the Wallflower series. I just never thought about the title of the series until it was spelled out for me in the early pages of Secrets of a Summer Night. I found the notion that these four women have forged a friendship out of their similar and somewhat dire situations quite endearing. Secrets of a Summer Night is clearly Annabelle Peyton's story, yet getting to know each of the women through their developing friendship was simply ... nice. I'm most definitely curious to find out how the other three women--the American sisters Lillian and Daisy, and the shy, overprotected Evie-- find their happily ever afters. I sure hope all four wallflowers continue to meddle in each others' affairs a bit. All good natured and with good intentions, of course.

At first, the plot and characters of Secrets of a Summer Night appeared rather straightforward to me. Basically, a young woman seeks husband of proper station to maintain respect among her peers and save her family from complete financial ruin, and she instead falls for the man of lower station that she's trying to dismiss, who happens to be rich and cares a great deal for her. That about sums it up, actually. However, the author somehow develops the characters right between the pages, unbeknownst to you and before you know it, they are so refreshing and do not fit any mold. Not only that, but the sub conflicts--and the development of the love between Annabelle and Simon, are unexpected, yet always realistic, so the story is entertaining, captivating and very importantly, believable. One of Lisa Kleypas' many talents as a writer is her ability to take an otherwise straightforward romance and turn it into something so much more beautiful and memorable with surprisingly fascinating characters and interesting twists in the story lines.

Another one of this author's talents, I think, is the how she incorporates a coming of age type element into the heroine's story. In Secrets of a Summer Night, Annabelle is adamant about marrying a proper man of her equal or higher station. It is so incredibly important to her, largely due to the fact that society expects this to be the norm. However, as circumstances bring her together with Simon Hunt and she learns more about the world beyond her little circle, Annabelle learns--completely on her own, mind you--how unfair and unbecoming it is to favor one person over another simply because of their social station. By the end of the novel, she learns one of life's most important lessons. That is, to judge someone's character by their character, not by their social status or by how other people judge them. Seeing Annabelle come to this revelation, and the fact that she came to it on her own with no pressure from society or even from Simon, was great and a very important element to the story.
Secrets of a Summer Night is a pleasant and endearing romance between two very charming characters whose story is equally charming. I'm looking foward to reading the next Wallflower book, It Happened One Autumn.
GRADE: B+