Construction Zone: A Roof Over Our Heads

It's been two weeks since my last post. I don't know how that happened!?!

Well, actually ... I have an idea. It's called living and breathing the partial demolition and rebuilding of your home right before your very eyes because you are living in it, making executive decisions on architectural, electrical, plumbing, heating and cooling system changes in the field, selecting roofing, siding, doors, plumbing fixtures, appliances, flooring, tile, etc., packing away your belongings, restructuring your living arrangements and trying to take care of your husband, two kids, elderly and easily disoriented father-in-law, and four cats the best you can so that their lives go on business as usual while you barely keep your head above water. That's what makes days and days and days go by without making a single blog post or finishing a single book. Yup. That would do it, all right.
The last post I made here on the construction was Sunday, October 26 and the framing of the first floor addition had just been completed. Despite a few delays here and there due to rain, the construction has been progressing really well. It looks as though we are ahead of schedule, which has put a bit of pressure on me to make some quick decisions on things, but I can't complain. I certainly don't want to be the cause of any loss of momentum on this project. Besides, it's good for me to have strict decision deadlines, because I tend to be indecisive and change my mind a lot when I have too much time to think about it.

So here's what's been going on in the Construction Zone:
October 30, 2008
Second floor walls have been framed. The blue tarp in the background is there to protect the existing structure since the siding has been stripped to the studs on the outside of the house. Remember my 1920s house has no insulation in the walls. We're still at the mercy of the weather until they're ready to put up the new siding at which point they will blow in insulation in the outside walls. 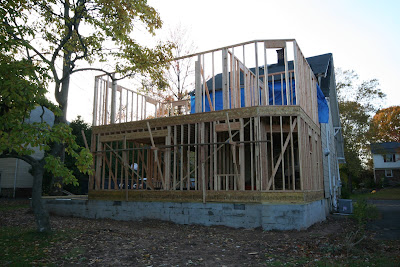 The side entrance from the driveway. I'm going to love that little covered porch. :) 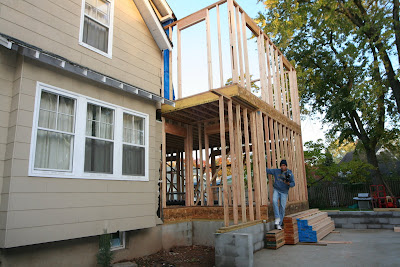 November 5, 2008
Plywood siding has been put up and window openings have been cut out. The roofers are framing the roof for the addition and marrying it to the existing roof line. 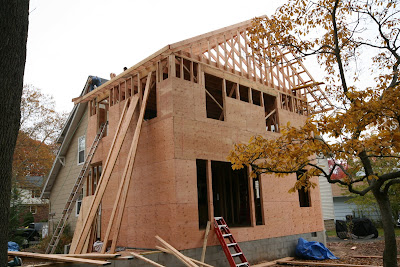 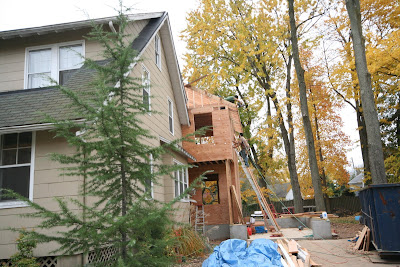 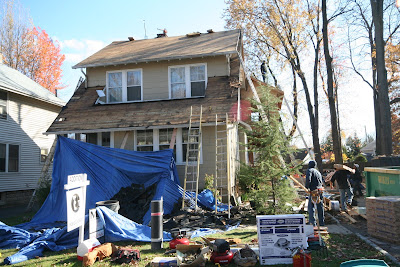 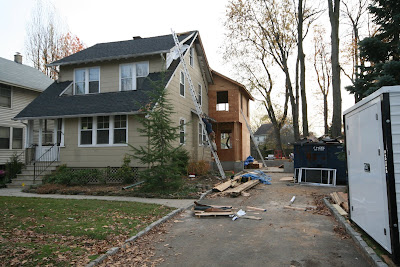 Note the mattress and box spring ready for the dumpster. My husband and I have no bedroom right now. We'll be camping on a futon mattress on the floor in the living room for a few months. So far it's very hard and very cold. It's only been a week and already I'm thinking of buying a sleeper sofa next weekend. 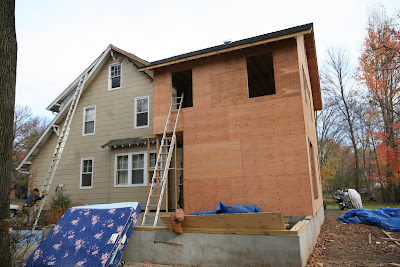 All the leaves have fallen from the magnolia tree out back and I can finally take photos of the back of the house straight on. 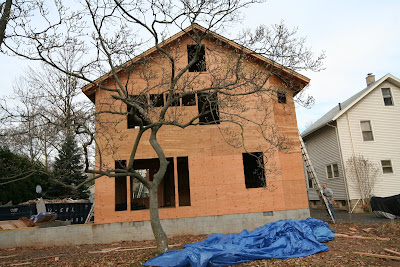 On Friday most of the windows in the addition got installed, but it started raining so I didn't get a chance to take pictures yet. Next up on the Construction Zone feature will be the inside of the house. Namely the part where I have no bedroom and no kitchen and a skinny piece of plywood between my dining room and the great outdoors. In the Northeast, USA. In mid November. Nice. :)
Posted by Christine at 11:44 PM